Home > News > Grace Gets in a Spin for Helipad Appeal

Grace Gets in a Spin for Helipad Appeal

The Silent Spin is a three-hour static bike spinning session, taking place at Pure Gym Altrincham on Saturday 17th September.  Up to 70 participants will be put through their paces by fitness instructors and to help the spinners to keep up the tempo they will all be provided with Silent Disco headphones, streaming tracks.

Grace, from Wiswell, is supporting the Silent Spin to help raise money towards the charity’s Helipad Appeal, a cause which is very close to her heart. Last year, following an onset of continuous headaches, Grace was diagnosed with Hydrocephalus, a build-up of fluid in the brain and ended up being blue-lighted to Royal Manchester Children’s Hospital for life-saving surgery.

Even though Grace was transferred by ambulance, due to rush hour traffic it took over 90 minutes to get to the hospital.

Grace’s mum Jo commented: “Being in the ambulance was the worst experience of my life. The paramedics were fantastic and kept us calm but my daughter was ill and being in the ambulance, not surrounded by the security of the hospital, made me feel extremely vulnerable. Having an onsite Helipad would have made such a huge difference; it would have helped reduce so much stress and anxiety, and importantly, got Grace to where she needed to be as quick as possible.”

Once Grace arrived at hospital the surgeons performed an Endoscopic Third Ventriculostomy (ETV), which meant they punctured a hole in her third ventricle, one of the natural brain water cavities, in order to create a new pathway for the brain fluid to be able to flow. Thankfully Grace’s surgery was a success and two days later her headaches had completely gone.

Jo added: “I can’t put into words how we felt when we knew the surgery had been a success. For now the ETV is working well, but Grace will be under the care of the hospital for the foreseeable future and will have to be reviewed in clinic every twelve months. Since finding out about the hospital’s Helipad Appeal Grace has been determined to help fundraise, and jumped at the chance of supporting this exciting event. We are incredibly grateful to all the fantastic staff for giving us back our fit and active little girl, and will do anything to help.”

“I get to meet so many remarkable patients at our Children’s Hospital, and Grace is no exception. It’s inspiring to see her so passionate about supporting our Helipad Appeal, as she knows first-hand just how important this Appeal is. Having an on-site Helipad will allow our family of hospitals to save many more lives of seriously ill or injured patients, so I urge people to get involved in this event and get spinning for a brilliant cause!”

Places for the Silent Spin are £20 per person, with a request to raise a minimum of a further £150 in sponsorship. For further information or to book your place on the Silent Spin please visit: www.rmchcharity.org.uk/events/silent-spin-2016 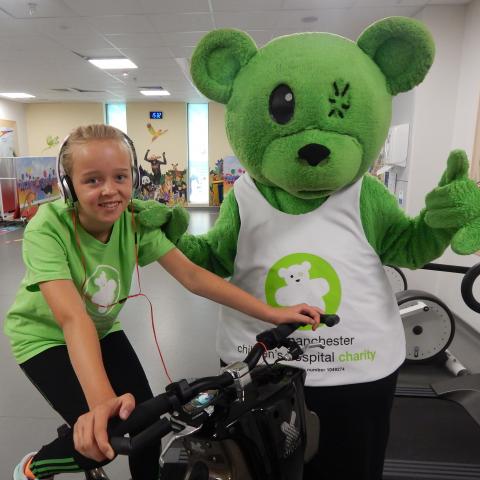