Gino D’Acampo Vows To Raise A Fantastico Amount of Money

Gino D’Acampo has opened the doors to his exciting new restaurant – My Pizza & Prosecco Bar – with a pledge to support Royal Manchester Children’s Hospital.

The UK’s favourite Italian chef announced the national partnership with the Royal Manchester Children’s Hospital at the launch of the authentic Italian bar and restaurant located at the refurbished flagship Next, Manchester Arndale, and has committed to donating all launch day sales.

The decision to support the UK’s biggest children’s hospital follows tragic events at the Manchester arena earlier this year, with Gino and business partner, founder of Individual Restaurants, Steven Walker, wanting to do something for the victims, families and emergency services directly caught up in the ordeal.

For every sale of the mouth-watering cocktail, a refreshing blend of Grey Goose vodka and Catron kiwi liqueur with apple, lemon juice and mint, £1 will go to the charity.   A Humphrey mocktail is also available for children, designated drivers or those just looking to keep a clear head.  A further £1 donation will also be made from every margherita pizza sold – anticipated to be one of the restaurant’s best sellers.   A range of further fundraising activities are planned for throughout the year.

Speaking on the announcement Gino said: “As a father of young children myself I was devastated by the terrible event at Manchester Arena earlier this year.  The way in which the medical team responded that night, many of whom were from the Royal Manchester Children’s Hospital, is nothing short of incredible.

“I am both humbled and honoured to be in the company of just some of the response team and to be able to contribute to their ongoing work.  We’re committed to raising a fantastico amount of money.”

Founder of Individual Restaurants Steven Walker added:  “We have worked with Maurice Watkins and his team at Royal Manchester Children’s Hospital for many years but are looking forward to being involved as a national corporate sponsor with our partner Gino.”

Gill Heaton, Chief Executive of Royal Manchester Children’s Hospital, said: “We are absolutely thrilled to have Gino’s support through this exciting charity partnership. Each year our Children’s Hospital treats over 260,000 children so support like this is invaluable in helping us to provide the very best treatment, research and care to the poorly children treated there.

“To have Gino’s support here in Manchester and nationally throughout his restaurants is something we are incredibly grateful for. We are looking forward to working together in the future, developing exciting new charity initiatives which will ultimately make a huge difference to children treated at our hospital.”

Gino said “I’m super excited to open My Pizza and Prosecco Bar in Manchester and with my new partnership with Next. What more can someone want than great pizza, great prosecco and a bit of retail therapy.” 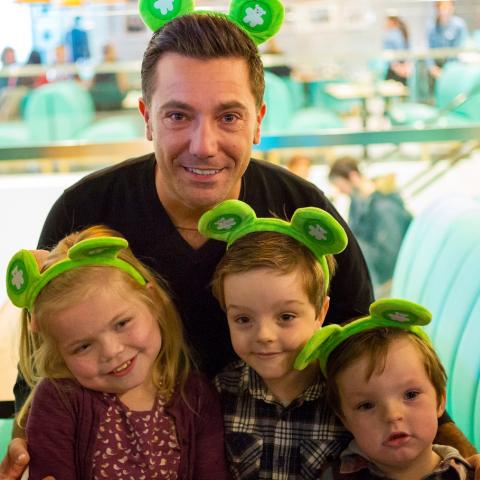