Generous donors who supported the appeal to raise funds for the new state-of-the-art Helipad at Manchester University NHS Foundation Trust (MFT) attended a ‘breaking of the ground’ celebration to mark construction work progress.

Funding for the Helipad was raised by MFT Charity’s Time Save Lives Appeal, which raised a phenomenal £3.9million in just 12 months, thanks to the dedication and generosity of its supporters.

Robert Bertram, from the HELP Appeal and Stephen Lowe, representing The Stoller Charitable Trust joined MFT Chairman Kathy Cowell OBE DL, and Maurice Watkins OBE, Charitable Fundraising Board Chairman to see progress on the construction project, with a visit to the roof of MFT’s Grafton Street Car Park where the Helipad will be situated.

They joined clinicians from Manchester Royal Infirmary (MRI), Royal Manchester Children’s Hospital (RMCH) and Saint Mary’s Hospital (SMH) highlighting the importance of the Helipad, which is expected to see an estimated 312 patients airlifted to the site each year.

The Appeal was the focus of the Charity’s fundraising, with individuals, businesses and community groups from across the North West all showing their support. This included a generous donation of £1.3million from the County Air Ambulance Trust’s HELP Appeal and £1.1million from the government’s LIBOR fines funds in the Chancellor’s Budget.

The new helicopter landing site, on the roof of Grafton Street Car Park on Oxford Road will enable critically ill or injured babies, children and adults to be airlifted straight to four major MFT hospitals, with a high level patient transfer corridor connecting the helipad landing site to the hospitals on MFT’s Oxford Road Campus.

Manchester University NHS Foundation Trust Chairman, Kathy Cowell, said: “It was a pleasure to again meet representatives from these organisations, who have so generously funded our Helipad. I was delighted to show our guests construction progress so far on our Helipad, which will help so many of our patients in the future.

“This is a very exciting time for MFT and the helipad is a fantastic project, which will help to save so many lives in Greater Manchester, the North West and beyond.”

Alistair Rennie, Consultant in Emergency Medicine and Major Trauma at the MRI and Group Clinical Lead for Emergency Planning at MFT, said; “This Helipad means that Air Ambulances, which currently land on a nearby field, will be able to land directly at MFT. This is crucial, as the first 60 minutes following a major trauma injury is known as the ‘Golden Hour’, and treatment within the first hour can mean the difference between life and death.

“Having a Helipad at MFT means patients will be able to get to our Hospitals via the quickest route when they have suffered a serious injury, which will undoubtedly save lives. I was proud to show our guests what a difference their generous donations will make.”

Robert Bertram, HELP Appeal’s Chief Executive, said: “It’s hugely exciting that in just a few months’ time, Manchester University NHS Foundation Trust will have a Helipad that allows critically ill air ambulance patients immediate access to its excellent Emergency Departments after landing. We never hesitated in funding this Helipad - one our biggest donations to a hospital since the HELP Appeal was created ten years ago - as we know it will save many lives across the North West.

“The hospital Helipad will also be only one of five across the entire country to have a Deck Integrated Fire Fighting System (DIFFS). We covered the entire cost of this state of the art technology as it can extinguish a fire in around 15 seconds, protecting the Helipad and hospital infrastructure.”

Stephen Lowe, from The Stoller Charitable Trust, said: “The Stoller Charitable Trust is proud to have contributed to the life-saving Helipad at Manchester University NHS Foundation Trust. The Helipad will make an incredible difference to critically ill and injured patients and help them to receive the care they need quickly.  We look forward to the Helipad becoming operational and hearing about the lives that have been saved across Greater Manchester and beyond.”

The helipad is set to be fully operational later this year. 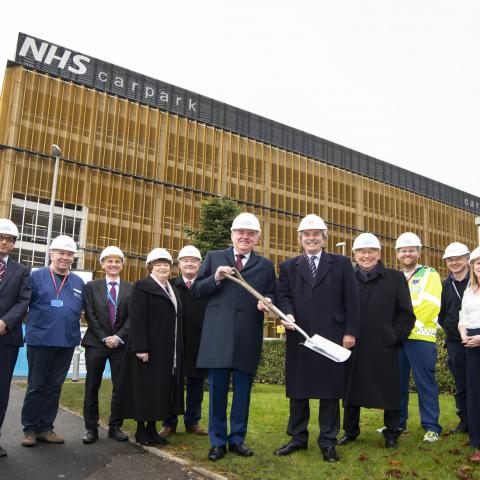