On Saturday 25th April Charlotte Jennings from Gatley held a very special 13th birthday party. Instead of asking for birthday presents like any other teenage girl, Charlotte asked for donations to Royal Manchester Children’s Hospital Charity (RMCH Charity), a place very close to her heart.

As she approached her 13th birthday Charlotte decided that the best gift she could get would be donations to the hospital which has treated her throughout her journey. So on 25th April, Charlotte welcomed 160 guests to the Hallmark Hotel in Handforth, at a party kindly sponsored by Bolton based Business Brokers, Hilton Smythe.

In January 2014 Charlotte’s life was turned upside down when she was diagnosed with a very rare form of Acute Myeloid Leukaemia, resulting in a bone marrow transplant in summer last year. Since her diagnosis Charlotte has been working tirelessly to raise funds for the Bone Marrow Transplant Unit and Ward 84, the children’s cancer unit at the hospital, despite her illness.

So far she has raised over £8,979.50, including a fantastic £5,300 from the party, despite currently fighting Graft Versus Host Disease and having Extra Corporeal Photopheresis which involves filtering her blood through high intensity UV light.

Tickets to her special evening sold out in record time with the party including a raffle, entertainment provided by James Chapel-Steele and James Watt and an auction, prizes ranging from Liverpool football memorabilia to 2 Platinum Tickets for the Manchester United Player of the Year awards. Charlotte also donated her own personal prized signed One Direction photo – signed by all five original members of the band, which may now become a rarity!

After Hilton Smythe heard Charlotte’s story they were determined to help her in whatever way they could by sponsoring the evening. Charlotte is now planning on visit their offices to thank their whole team for their support.

Since diagnosis Charlotte has been involved in a number of fundraising ventures at the hospital including shaving her dad’s head just two days before her bone marrow transplant, as part of RMCH Charity’s Be Seen in Green Day. She has also spoken numerous times on BBC Radio Manchester and only a few weeks ago took part in the Moon Rise Run.

Charlotte has also been recording her thoughts since her bone marrow transplant on her Facebook Page, Charlotte’s Challenge, a name she gives to her fundraising and battle against her leukaemia.

“I want to be known as someone who has made a big difference by raising money for the hospital, not just as the girl who has got cancer. The care and treatment I have received from the hospital has been amazing, I just want to give something back and to help other children like me. I know first-hand what it’s like to be in hospital for a long period of time, I was in isolation for over 2 months. I want to help purchase distractions, like DVD players, which makes life easier for patients and their families at this difficult time.”

“I want to thank everyone who came to my party, donated or helped out in any way; everyone’s support has been amazing. I especially want to thank Hilton Smythe, I can't put it in to words what it their involvement means to me. It was great to have all my family and friends together in one room raising money for the hospital.”

“Charlotte is such a remarkable young lady and she never fails to amaze the team with her enthusiasm and positivity. She is a true inspiration to us all. The party was such a special evening for her. Asking for donations instead of presents really does show what a kind-hearted and selfless person she is.”

For more information about Charlotte visit her Facebook page 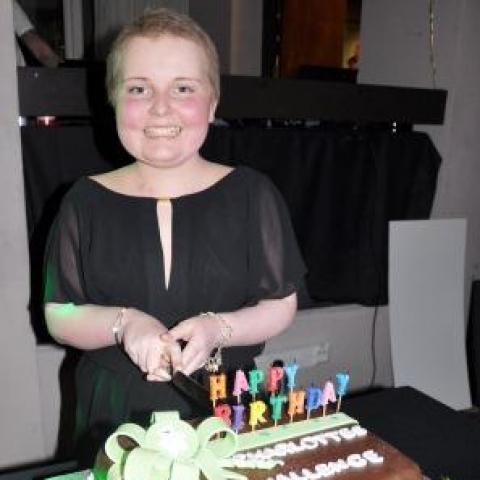