Home > News > Friendship and Fundraising - The Story of Hughie and Freddie

Friendship and Fundraising - The Story of Hughie and Freddie

AN INSPIRATIONAL leukaemia patient and his fundraising best friend have captured the hearts of the nation – and raised a staggering £200,000 in the process.

Hughie Higginson and Freddie Xavi may only be 10 years old but have already been referred to as “the new Ant and Dec” and have appeared on This Morning, Sky Sports and BBC Breakfast as well as in their own local newspapers. The story of their friendship and determination has enabled them to raise more than £200,000 for Royal Manchester Children’s Hospital Charity. And the phenomenal amount of money will be used to save lives and further improve the hospital experience for children just like Hughie.

The list of things the boys have enabled the Charity to buy include vital life-saving equipment, a supply of fresh fruit for Hughie’s ward and, as Hughie saw for himself this week, new slushie pouches to soothe the throats of young cancer patients.

Hughie was excited to try a Sour Cherry flavoured slushie. He said: “It was really exciting that the first slushies have been delivered.  Were really lucky because after hearing what we were doing, the Manchester Drinks Company actually decided to donate the first year’s supply of slushies for free.

“I got to try the first one when they arrived and hand the first box over to the ward. I struggled a bit at first to get it out the package as they were still really cold but I really liked the flavour.”

Hughie is currently an outpatient of the hospital’s Ward 84 Oncology and Haematology Unit, having been diagnosed with acute lymphoblastic leukaemia on 23rd September 2020. He faces three and a half years of treatment at Royal Manchester Children’s Hospital.

His mum Katy said: “Our world was turned upside down when Hughie got his diagnosis. But ever since he has been incredibly brave and has faced it head on without any moaning.

“He’s had so many blood tests, scans and trips to theatre but he is always smiling and entertaining the staff on Ward 84. He’s particularly proud of his Donald Duck impression so all the staff call him Donald.

“We are so proud of his positive attitude and resilience to everything that has been thrown at him. He’s our superstar.”

Wanting to give back to the hospital that was treating him, Hughie and his classmates from school decided to take part in the Charity’s Humphrey’s Lantern Walk, a virtual walk named after their mascot green bear. Sadly, on the planned day of the walk he was too poorly to take part and instead friends and family went in his place. He still raised more than £9,000 on his own JustGiving Page and as a group his friends raised £18,000 combined. Hughie was clearly bitten by the fundraising bug….which spread to best friend Freddie.

Freddie set himself his own fundraising challenge of running 2km every day in the 50 days leading up to Christmas – an amazing 100km in total. Word of Freddie’s fundraising started to spread and soon the two boys were invited onto their local BBC radio station.

Freddie’s mum Sarah Ronnan said: “At first he set himself a target of £1,000 and we thought that was a bit of a challenge but hoped he could get there. And then we were on the radio station and the presenter asked how much he’d like to raise and Freddie plucked a number out the air and said ‘I think £30,000 would be good’. I remember glancing at him thinking ‘oh wow….that’s a LOT. How are we going to do that?’”

Sarah didn’t need to be concerned – soon BBC Breakfast picked up on their story and Freddie and Hughie starred in a special piece about their fundraising. Their beloved football club Burnley FC also heard about the challenge and player James Tarkowski gifted the boys two PlayStation 5s as a congratulations for all their hard work. Later, some of their players joined Freddie on a run around their ground at Turf Moor which BBC Breakfast broadcast.

As the TV viewers started to clock up, so did their fundraising total. And on 14th December 2020 the boys had not one, but two TV appearances – on BBC Breakfast and then This Morning. While taking part in a live interview on This Morning they chatted to Eamonn Holmes and Ruth Langsford who spun the “Spin to Win” wheel. When it looked like it would land on a lower figure, Ruth grabbed the wheel to make the arrow point at £3,000 – the highest figure on the board!

Freddie said: “We couldn’t believe it when Ruth cheated the wheel so we could have more money for Royal Manchester Children’s Hospital Charity. And then after the wheel they also played a special message from Gino D’Acampo…it was amazing.”

The boys have continued to share their amazing story of friendship and fundraising with the world and have been supported by the likes of Burnley FC, Accrington Stanley, Gino and Radio 1 DJ and fellow Burnley fan Jordan North. On Christmas Day Freddie completed his final run live on BBC Breakfast and Sky Sports , cheered on by his family and, of course, Hughie.

Hughie’s dad Keiron said: “The boys have just had so much fun along the way and it’s been a great distraction for Hughie. The medicine used to treat leukaemia can be very harsh at times, especially on such a young body, but Hughie’s strength and character always comes through the tough times. All he has done has been a nice distraction and he loves doing it.”

Hughie and Freddie’s story has also inspired their friends and family to get in on raising vital funds for Royal Manchester Children’s Hospital Charity.

Last month, Hughie’s dance teacher Helen Cheung shaved off her long auburn hair. She also took the clippers to husband Simon and together the couple raised more than £2,700 on their JustGiving Page to add into Hughie and Freddie’s total.  And Hughie’s friend Evan completed a Three Peaks Challenge – raising a further £480 to add to the ever-increasing total.

Georgia Sleigh, a Community Fundraising Officer at Royal Manchester Children’s Hospital Charity, said: “Freddie and Hughie are just incredible – words just don’t do justice to how inspiring they both are.

“We think their story of friendship and fundraising has really resonated with people, particularly at this time. We’ve all found lockdown and the Covid pandemic news a real struggle to cope with but you can’t help but smile when you see their beaming faces.

“I think we all need to take a leaf out of their book – we need to be as brave and courageous as Hughie and be the best friend everyone needs like Freddie!”

Hughie and Freddie’s fundraising will not only ensure a supply of slushies and fruit for Hughie’s friends on Ward 84, it will also fund a Belmont Infusor -  a piece of equipment which rapidly warms blood ready to transfuse into critically ill patients who have sustained a life-threatening injury, such as a major car crash or a stabbing. It’s important blood, and blood products, are warm when transfusing to reduce the chance of hypothermia.

And with their ever growing fundraising pot, there will no doubt be more items added to their shopping list, which the Charity will keep supporters up to date on.

To donate to Freddie’s JustGiving Page click here or find out more about Royal Manchester Children’s Hospital Charity and how you can get involved in fundraising. 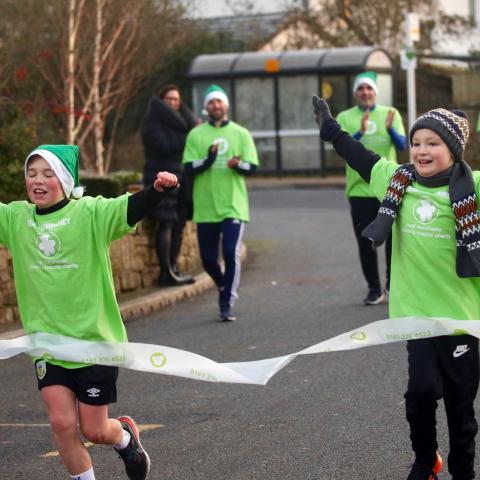