Five Years of the Children’s Hospital

Five years ago today (11 June) Royal Manchester Children’s Hospital opened its doors for the first time, and what a half decade it’s been.

Now, the biggest children’s hospital in the UK is looking back on the fantastic work carried out by staff, the inspiring stories that have come from the hospital, mascot Humphrey Bear and everything else in between.

Sitting on Manchester’s Oxford Road, Royal Manchester Children’s Hospital is a centre of excellence encompassing everything that poorly children need - specialist doctors’ inviting, colourful and engaging wards and space for family members to stay on the wards with patients.  It is a wonderful facility for the people of Manchester to have on their doorstep and one that inspires much civic pride.

The new hospital was opened on 11th June 2009 as part of a grand scheme to bring five hospitals to a single, self-contained site - the size of 66 football pitches - in the heart of Manchester.  The new hospital replaced out-of-date facilities at Manchester’s much-loved old children’s hospitals, Pendlebury - the first hospital in the UK to exclusively treat children when it opened in 1829 and Booth Hall, opened by philanthropist Humphrey Booth in 1908 at his home in North Manchester.

Royal Manchester Children’s Hospital Charity mascot, Humphrey the green bear, is named after Humphrey Booth, a man who played a key role in laying the foundations of children’s healthcare in Manchester.  Since the hospital opened Humphrey Bear has become a celebrity in his own right.  He has had a street dance battle with George Sampson, taken part in the Great Manchester Run four times, run in the first ever race on the track at the Olympic stadium, climbed onto the roof of the Trafford Centre, met a whole host of celebrities as well as regularly visiting patients at the hospital to cheer them up.

In the five years since it opened its doors the hospital has had over 960,000 visits from children across in patients, out patients and A&E.  On an average Tuesday the hospital sees 803 patients.

Since the new facility opened, the hospital’s Charity has gone from strength to strength and been dedicated to raising money for projects that will enhance Royal Manchester Children’s Hospital and ensure it’s not just the largest children’s hospital in the UK but also one of the very best.

Individuals, schools, companies and celebrities have fundraised tirelessly over the past five years to ensure continued excellence in treatment, care and research at the hospital.  As support for the hospital has grown, so has the presence of the distinctive lime green charity t-shirts and sports vests worn by fundraisers at events.

A staggering £5.8 million has been raised by the Charity for the Hospital, funding projects such as the expansion of a world class children’s medical research facility, the installation of therapeutic artworks in the radiology and hydrotherapy departments to help distract patients whilst they undergo treatment and the provision of entertainers and giggle doctors to visit patients on the wards.

A host of local celebrities including Antony Cotton, Phil Neville, Guy Garvey, Rebecca Adlington and many more have pledged their allegiance to the hospital, taking part in fundraising events such as the Great Manchester Run and the Celebrity Grilling cook off, as well as giving surprise visits to the wards.

Royal Manchester Children’s Hospital is a centre of excellence for paediatric care and offers specialist treatment for children across the region from as far north as Cumbria, down to Stoke and across to North Wales.

The hospital has the main Bone Marrow Transplant Unit for metabolic disease outside London and boasts the first paediatric accredited unit in the UK.

The burns unit is the largest specialist burns unit in the country. When it opened in 1953, originally at Booth Hall Children’s Hospital, the unit was the first of its kind in the UK.

The Paediatric Intensive Care Unit is the largest in the country and is one of the leading centres in the North West. It provides care for critically ill children and their families. The unit treats patients ranging from new born babies to 16-year-old teenagers.

“We want to say a huge thank you to everyone who has supported Royal Manchester Children’s Hospital Charity over the last five years.  This hospital belongs to the people of Manchester and so many of them have played a part in making it what it is today through charitable donations.  The support of fundraisers has allowed us to complete projects that really do have a huge impact on our patients’ lives.”

If you would like to give Royal Manchester Children’s Hospital a birthday present and donate £5 for 5 years text RMCH05 £5 to 70070.

To see a film about the work of Royal Manchester Children’s Hospital Charity visit: 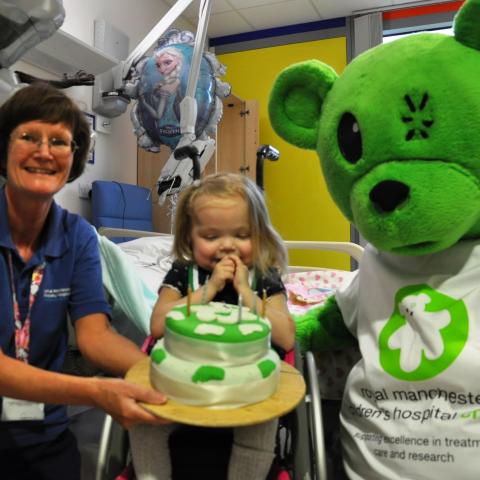