A YOUNG girl whose parents feared they would never see their little princess so much as crawl proudly watched as she took her first steps for a charity walk.

Iris Travis was brave and determined as she held herself up and, with help from Daddy, walked down her garden path, surrounded by the captive audience of her teddy bear collection.

Iris, who turned two last month, has spina bifida, enduring operations from just two days old until as recently as a few months ago.

As spina bifida patients can vary greatly in their needs and capabilities, medical teams at Royal Manchester Children’s Hospital had warned her parents there was a chance she wouldn’t move her legs, crawl or walk. But last week Iris strutted her stuff down the garden path to take part in the hospital charity’s Teddy Toddle.

“She was so excited about going outside to walk with Daddy,” said mum Jennifer. “She is fiercely independent and is determined to do all the things her brother and sisters are doing.

“When she plays outside she is usually in her little wheelchair – at the moment there are too many stones and paving slabs for her to be out crawling as she’d scrape her knees too much.

“So the Royal Manchester Children’s Hospital Charity Teddy Toddle was her first time walking outside – and she loved it.”

“In the run up she was so excited knowing she was going to be walking outside with Daddy – we were all cheering her on and she did incredibly well.”

Iris lives at home in Swinton, Greater Manchester, with mum Jennifer and dad Andrew, both 35, and siblings Daniel, 11, Ella, 10, and Maggie, three.

Iris was first diagnosed with spina bifida when she was still in the womb, when Jennifer went for her 20 week scan. Jennifer and Andrew were told their unborn baby would need surgery days after she was born and the couple were transferred to Saint Mary’s Hospital for all subsequent antenatal care.

Little Iris was born on 4th April 2018 and was transferred straight to the hospital’s neonatal intensive care unit (NICU). At just two days old, she underwent her first operation – an 11 hour procedure in which her spinal cord was placed back within her spine. She was also fitted with a shunt to drain any excess fluid from her brain.

Speaking at that time, Jennifer said: “As parents it was terrifying to have to kiss goodbye to our little girl and see her sent to surgery, but we knew she was in the best possible hands.

“Thankfully the surgery was a success and Iris recovered really well. Within two weeks she was well enough to leave the NICU and she was transferred to Ward 78 at Royal Manchester Children’s Hospital. The ward soon became a second home for us and all the staff on the ward were just amazing. We couldn’t fault the care we received.”

Iris was discharged from hospital later that month, but she was only home for one night before she had to return to the children’s hospital. Her shunt had become blocked, causing her abdomen to start leaking cerebrospinal (CS) fluid. She underwent a further surgery for a shunt revision and after two weeks of IV antibiotics Iris was discharged home. Sadly history repeated itself, the CS fluid began leaking from her back closure site and she had to be taken to theatre for a third operation.

At this point, Iris’ neurosurgeon decided to fit her with a programmable shunt – hoping this would avoid numerous trips to theatre. It proved to be the right decision when her CS fluid started leaking for a third time, shortly before she was due to be discharged home. Doctors performed a simple, non-invasive procedure to change the flow of the shunt.

“Since that time in 2018 she has only needed one more operation to have a problem with her shunt fixed in 2019, and we’re hoping that will be it for a while,” said Jennifer, who works as a secondary school teacher.

“Having heard all the worst case scenarios about her mobility, we do celebrate every victory. The first time she crawled was just incredible – we were very emotional. She was later than other babies but it was such a nice surprise she was able to do it. I still like to watch the video on my phone.

“Then when it came to being upright, it has taken her a considerable amount of time to be able to stand up next to the furniture and hold herself there. But walking is more difficult. Iris cannot bear her own weight when standing. Her right leg is quite good for movement but she struggles with her left.

“But each day she is getting better – she’s Miss Independent and wants to play outside with her brother and sisters. If she has the plastic cup with the lid and she sees her sisters with the ‘big girl’ cups she will demand to have the same as them. She doesn’t want the baby plates, she wants the grown up plates. She’ll give everything a good go to keep up with them.”

Iris loves playing with her dolls and building bricks and is a big fan of Peppa Pig and Hey Duggee. She also loves bedtime stories and gets very excited about books.

On Friday, Iris completed her Teddy Toddle challenge, cheered on by her family and collection of teddies. Of course, her smaller version of charity mascot bear Humphrey was there at the end for cuddles.

Usually, Royal Manchester Children’s Hospital Charity encourages nurseries to hold their own Teddy Toddles, with youngsters walking in groups around the nursery playground or a nearby field. But since the Covid-19 restrictions came in, the Charity has been encouraging youngsters to do their own Teddy Toddles at home – in gardens, up and down stairs or even from room to room.

Jennifer said: “We’re so proud of her and whatever happens, we will always celebrate her achievements. She’s such a wonderful little girl.”

The family’s fundraising page initially had a target of £100, but Iris has smashed that – raising more than £1,200.

Angela Rowe, Senior Community Fundraising Manager at Royal Manchester Children’s Hospital Charity, said: “Iris has done so well with her walking and it was lovely to hear she’d been practising hard before the big event.

“It’s very heart-warming to hear the family think so highly of the hospital. Both their medical journey and their fundraising are inspirational.

“We hope people who see Iris’ story will be moved to do their own Teddy Toddle at home. You can find all the information on how to do this on our website.”

The support of our Charity means the hospital can provide additional resources that make life easier for patients and their families who use the hospital.
The charity has three main areas of work: 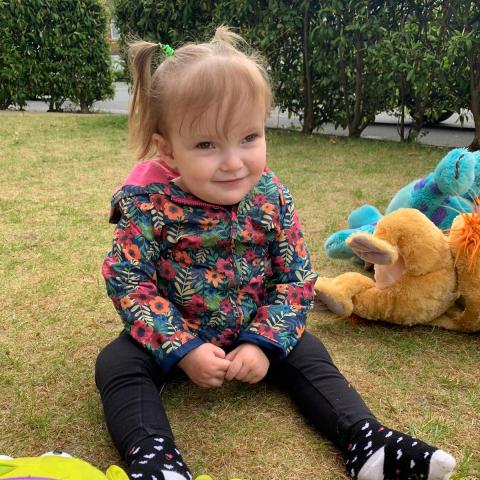