Family's Fundraising After Both Sons Born With Rare Condition

THE family of a little boy who is often covered in bruises is helping dispel some of the myths of being a haemophiliac.

Fox Mycock, who turns two this Christmas, was born with severe haemophilia – a condition which affects his body’s ability to stop bleeding. It means he bruises easily and cuts and scrapes can often result in a trip to Royal Manchester Children’s Hospital.

But Fox’s parents, Matthew and Hazel, have refused to “keep him in bubble wrap” and are determined their little boy will lead as normal a life as possible.

The news of Fox’s diagnosis was a heart-wrenching moment for the couple, as their first son Rufus died from a bleed on the brain when he was just seven days old, in October 2014. The two boys suffering from the same condition is incredibly rare – only about 400,000 people worldwide are thought to have haemophilia.

“Rufus hadn’t been diagnosed with haemophilia at first, so it hadn’t been noticed that the trauma of birth had caused a bleed on his brain,” said Hazel.

“It’s a genetic bleeding disorder so usually there is a family history and you know to look out for signs – but we had none of that.

“We had Rufus home from hospital for a few days after his birth but by the time we found out what had happened it was too late. He was seven days old when we turned off the machines.

“Everyone on the ward at Royal Manchester Children’s Hospital was just absolutely amazing – but it was the worst thing to ever happen to us. It was just horrible. You don’t know what to do and you constantly question yourself – what if it’s your fault?

“We wanted something, anything, positive to come out of it, which is why we started fundraising for Royal Manchester Children’s Hospital Charity.”

After the devastating loss of Rufus the family began their fundraising journey. They also underwent genetic testing at Royal Manchester Children’s Hospital. There were no signs of haemophilia running in the family and instead it was thought perhaps Rufus’ condition was due to a genetic mutation.

The couple were considering whether they’d go on to have another child, but were happily surprised when they became pregnant with Fox in 2017. Although the genetic testing hadn’t found any family evidence, throughout the pregnancy an extra special eye was kept on Hazel and the baby by specialists near their home in Leek, to err on the side of caution.

Hazel, 35, said: “When Fox was born we had him tested and we got the news he had haemophilia – it was like being punched in the face. Again.

“We drove straight up to Royal Manchester Children’s Hospital and they reassured us so much. Obviously we’d had a horrible experience with Rufus so we wanted to know our new little baby wouldn’t come to any harm.

“We were told we were more likely to win the lottery two weekends on the bounce than we were to have no family history, have both boys diagnosed with the condition and to have found out in such a traumatic way. Although it’s now clear I must have been a carrier of severe haemophilia.

“The specialists were amazing at reassuring us Fox would be a healthy boy and live a relatively normal life.”

Hazel and Matthew now have a dedicated memorial fundraising page and have raised thousands of pounds for Royal Manchester Children’s Hospital Charity. Our Charity enables the hospital to provide additional resources that make life easier for patients and their families who use the hospital.

We have three main areas of work:

What started off as a £10,000 legacy fund in Rufus’ honour has now resulted in the family raising more than £30,000 for the Charity. The funds were raised from a whole host of events since 2014, including the Manchester 10K and, most recently, The Race To The Stones – a gruelling 100km ultramarathon along the North Wessex Downs.

Hazel and her friend Gemma Hurst completed the 62-mile course in 19.5 hours, crossing the finish line at 4am. Cheering them on were family and friends, including Fox.

“We told him the Race To The Stones was for his big brother – so he does know a little bit about Rufus,” said Hazel.

“We make sure we talk about him and the boys have the same middle name – Darwin.

“After what we’ve been through with Rufus I think it would be easy to be super protective of Fox but we try not to be. The doctors have said the stronger his body is, the better it will be able to cope with the haemophilia, so he we do let him run about and go swimming.”

As with most little boys, Fox will get the odd knock and scrape when he’s exploring his surroundings, which sometimes leads to a very sore-looking bruise. A joint or muscle bleed is often more serious and can lead in a drive up to Royal Manchester Children’s Hospital.

“When he’s swimming obviously his chest is exposed so sometimes we do get some strange looks from people – you know they’re assuming the worst,” said Hazel.

“We’ve never had anyone come up and question it before, but you do see them looking at his bruises.

“I’ve set up a Facebook group called “The Fox Factor” to explain more about it. Sometimes the bruises look really awful – but they’ve come from the smallest knock which wouldn’t have even registered with the likes of anyone else.

“He has injections just when he needs them at the moment. But soon he will need to be injected every few days to prevent lasting damage to his joints. But Fox has a normal life expectancy. I obviously have days when I wish it wasn’t like this and ask ‘why did this happen? This isn’t fair’ but it’s about management.

“We’re determined he will live an active life and do everything other little boys do – we don’t want to wrap him in bubble wrap or make him scared.”

The family have been inspirational in their fundraising and the Charity team are particularly impressed with Hazel and Gemma’s ultramarathon.

Royal Manchester Children’s Hospital Charity’s Senior Events Manager, Viv Williamson, said: “We’re so incredibly grateful to Hazel, Matthew and all their family and friends for the amazing fundraising they’ve done for us over the years. Hazel and Gemma did particularly well completing a 100km ultramarathon – I certainly hope they’ve had a well-earned rest since.

“Learning how Fox is still an adventurous little boy, never letting his condition deter him, is incredibly moving. Fox may only be 19 months old, but he’s an inspiration.”

To make a donation on the Rufus Mycock In Memory page visit https://rufus-mycock.muchloved.com/ and to read more about Fox’s story visit “The Fox Factor” on Facebook. 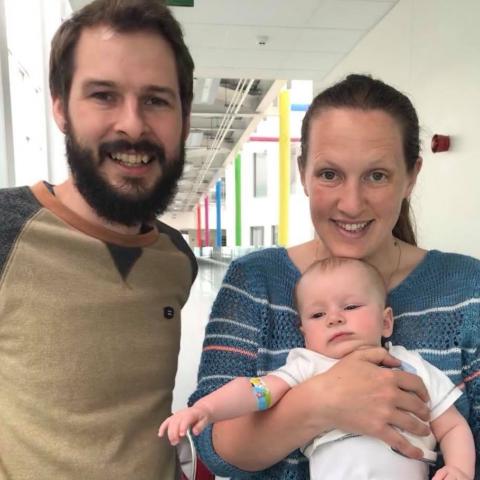