Family Raise £200,000 For Team That Saved Their Baby Daughter

A FAMILY whose little girl was saved by an incredible team of NHS staff have raised a staggering £200,000 for charity.

Sienna Malley was just a few months old when, nine years ago almost to the day, she was taken seriously ill. At one point her parents were told they should prepare to say their goodbyes.

But thanks to the lifesaving team at the North West and North Wales Transport Service (NWTS) Sienna is now a happy nine-year-old – running around on the football pitch and keeping her parents busy commuting to swimming lessons and piano classes.

“Every day I see Sienna running around or playing with her sisters and I’m reminded just how close we came to losing her,” said Kerri.

“When we see her at the school sports day that’s a particularly emotional time for the family. We never thought we’d see the day she won the sprinting. We know we’re lucky that we get to enjoy these special moments.

“We’re so grateful to the whole team at NWTS. We often come back to see what equipment they’ve bought and how they all are.”

Sienna, Kerri and Adam’s first child, was just eight months old when she started to suffer a high temperature back in December 2010. She couldn’t keep any milk down and Kerri was terrified her daughter wasn’t getting the nutrition she needed.

Originally diagnosed with tonsillitis, Sienna was given some medication to reduce her temperature and was discharged home. But her condition worsened and she was admitted back into hospital. Her condition continued to deteriorate and it soon became clear Sienna would have to be transported from her local hospital to the paediatric intensive care unit at Alder Hey in Liverpool.

“The NWTS team were just incredible,” said Kerri. “They were called at 4am in the morning and it took them about 10-12 hours to stabilise her so she’d be well enough to make the journey.

“I can’t tell you what it’s like to watch your baby going through all that. You always think these things happen to other people, so when it happened to us I just couldn’t comprehend what was going on.

“At this point they were giving her a 50/50 chance, it was just awful. But after about 10-12 hours they managed to stabilise her enough to transport her to Liverpool.”

Those first few hours on PICU were critical and Kerri and Adam were asked to invite in close family to say their goodbyes. They later learned at her worst point, Sienna was given just a 4% chance of surviving.

“That period of time just didn’t feel real,” said Kerri. “My husband seemed to carry me during that time because I was in a daze. I couldn’t accept our little girl was going to die.”

Sienna was diagnosed with Streptococcal Septicaemia and Swine Flu. Kerri and Adam attribute her recovery to the lifesaving team at NWTS, who were able to transport her safely to Liverpool for the care she so desperately needed.

Kerri and Adam both describe their daughter as a “little fighter” and her strength and determination meant she was able to be discharged from hospital a few weeks after being admitted.

It was only later on, when Sienna was discharged home just in time for Christmas, that the family found out NWTS had only been set up a month before their daughter become poorly.

“Sienna was a fighter and has been ever since,” said Kerri, who lives with her family in Winterley in Cheshire. “She was riding a bike without stabilisers at age three, she plays football with boys, she’s a really fast runner…she has so much inner strength.

“I have absolutely no doubt that the NWTS people, along with the doctors and nurses at the hospital, saved Sienna’s life.

“We knew pretty much straight away we wanted to do fundraising for NWTS via Royal Manchester Children’s Hospital Charity. We came up with a target of £100,000 as we did some rough calculations of the ventilator Sienna was on, how much a stay on ICU is etc and came up with that figure. When we reached that we thought ‘well, we might as well double it’.”

The Malley family, friends, colleagues, classroom pals of their daughters and business partners have all helped reach the target. Events have varied from family parties to a Three Peaks Challenge, Great Manchester Run 10K, The Paris Marathon, and a Kilimanjaro trek. Kerri’s family business, Concept Car Credit, also donates £10 for every car it sells. Sienna regularly takes part in fundraising herself or cheers on the fundraisers together with her younger sisters Scarlett, aged eight, and three-year-old Seren.

“We won’t stop fundraising….so maybe it’s time to pass the baton to Sienna herself?” laughed Kerri.

NWTS was set up to transfer critically ill children from district general hospitals to one of the two paediatric intensive care units in the area, which includes Royal Manchester Children’s Hospital.

Angela Rowe, Community Fundraising Manager for Royal Manchester Children’s Hospital Charity, said: “It is always an incredibly special day when Sienna and her family visit the NWTS base and chat to the team about all their wonderful fundraising.

“To look at Sienna now, it’s hard to picture her as a tiny baby, hooked up to machines, fighting for her life.

“But the fact she is here today, running around with her sisters, is testament to the wonderful work NWTS do. Without them Sienna, and other children like her, may not be around to enjoy special moments with their family.”

To find out more about NWTS visit the NWTS website and to make a donation to the cause call the Charity Team on 0161 276 4522.  Alternatively visit the family’s JustGiving fundraising page. 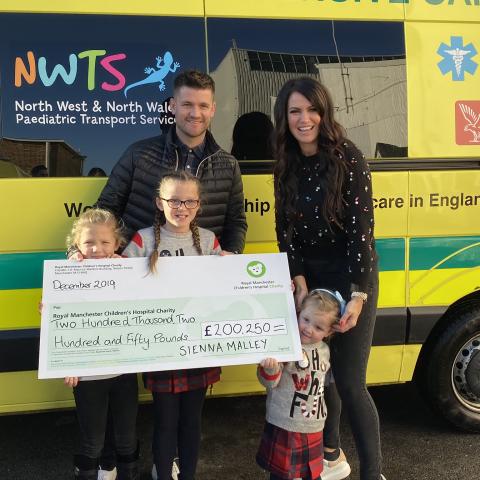