Family Fundraises for Hospitals which Saved their ‘Little Fighter’

The family of 16-month-old Lily Gavin from Middleton have raised £2,000 to say thank you to the hospitals where she has been treated from birth.

It was at her 20 weeks scan when Lily’s mum, Leanne and dad, Anthony received the devastating news that her unborn baby girl had a complete heart block. Lily was delivered early at 34 weeks as doctors were worried she might not survive because she hadn’t grown in two weeks and had leaky heart valves. Lily was immediately transferred to the neonatal intensive care unit (NICU) at Saint Mary’s Hospital where staff worked hard to keep her alive, and at just 12 days old Lily was transferred to Alder Hey Hospital where she had a pacemaker fitted.

“Lily has been a fighter from when she was just 20 weeks old. She has been through so much already and has fought all the way to get where she is today. It is every mother’s worst nightmare to know your child is seriously ill, especially when they are so small and helpless. I can’t thank the staff at Saint Mary’s Hospital enough for everything they did for Lily. They did an amazing job and I owe so much to them.”

Since Lily’s initial surgery she has frequently been admitted to Royal Manchester Children’s Hospital with cold infections and respiratory problems, the most serious case in November 2015 when she was admitted to the Paediatric Intensive Care Unit (PICU) for over three weeks, where she was ventilated and paralysed with bronchiolitis.

So grateful were Lily’s family for the lifesaving care she received, they decided to host a charity golf day at North Manchester Golf Club. The day saw 28 golf teams taking part which included ‘nearest the pin’ prizes and a longest drive prize. Lily’s Grandpa Dai Jones took a lead on organising the event, with a tombola and auction helping to raise extra money on the day.

Leanne added: “Unfortunately Lily is very susceptible to picking up new infections and colds, yet every time she has been admitted to hospital she has been treated with the upmost care, with the  nurses and doctors dedicated to getting her better every time. That’s why we held our charity golf day, as our way of saying thank you and showing our appreciation for the care she has received.”

“We are incredibly grateful to receive this fantastic sum raised by Lily’s family and friends. Lily is such a brave little girl who has managed to overcome so many obstacles, so early on in life. It’s inspiring to see a family so dedicated to raising money when they have been through so much. The money raised will be well spent in continuing to provide the very best environment for young patients at both Saint Mary’s Hospital and Royal Manchester Children’s Hospital.” 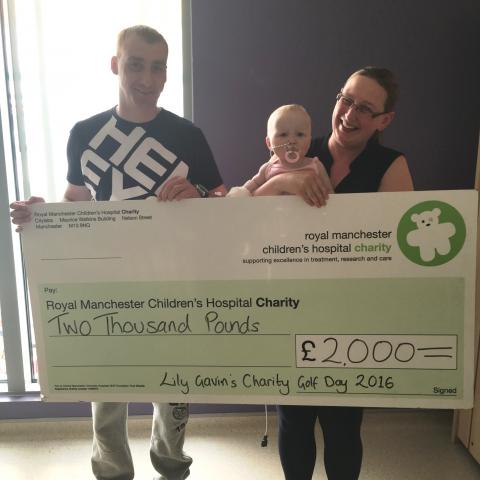