A YOUNG teenager who had part of her skull removed when her brain started pushing down on her spinal canal has taken on a Snowdon challenge.

The challenge would have been hard going for even established walkers, but Erin Orlopp, 15, has to constantly battle dizzy spells and vision difficulties.

Erin was just 13 years old when she felt some pain in her jaw and her right cheek started to swell. She was given an MRI scan and some abnormalities were found on her brain. Specialists at Royal Manchester Children’s Hospital explained she had ‘cranial instability’ and said the Bolton schoolgirl would potentially need surgery in the future.

In September last year, after returning from a family holiday in Mexico, Erin couldn’t walk in a straight line and her family immediately knew something was wrong.

Her mum Alison said: “She was acting almost like she was drunk – she was staggering about and had visual disturbances, so we knew something was wrong. The next thing we knew she was scheduled for brain surgery.

“They said she had Chiari malformation and basilar invagination.

“I was obviously worried sick the whole time, but as soon as she woke up from the surgery she said ‘mum, I’m not dizzy anymore’ and I realised what she’d been going through.”

The surgery saw the lower part of Erin’s skull removed, to give her brain more space. It had been hanging down and pressing on her spinal cord and brain stem, which had been responsible for her symptoms.

Erin said: “I was really, really scared when I knew I had to have the operation. At first I thought ‘why has this happened to me?’ but after a week I just told myself I might as well not worry about it. It’s going to happen so what’s the point in worrying and complaining?”

Although the surgery helped fix her Chiari malformation, Erin still suffers from basilar invagination. This condition also causes pressure on her brain stem, which sadly means some of her dizziness has returned.

“One of the hardest things we face is knowing she can’t do some of things she always enjoyed doing before,” said Alison. “We used to go to Alton Towers every year as a family, she loves rollercoasters, but things like that are out of the question now.

“She can’t do contact sports and she can’t do trampolining either, which she also used to enjoy. She went skiing and really wanted to go again but she can’t. She also can’t wear headphones when she’s out and about in case it makes her dizzy and if she lifts too much weight her head starts to hurt.

“There are a lot of things that have changed for her, and she’s getting to know her limits. But most of the time she just shrugs it off – she stays positive.”

Despite the changes in her life, Erin is now back at school and scaled Snowdon on Saturday, 30th March 2019. She decided to fundraise for the iMRI Appeal at Royal Manchester Children’s Hospital, as she’s undergone several MRI scans as part of her treatment.

“All the help I’ve received at the hospital has been amazing,” said Erin. “So I wanted to do the climb for all the children who aren’t able to.

“Seeing other children in the hospital really made me want to do some fundraising, then mum mentioned about Snowdon and it sounded like a really good idea. I wanted a challenge.”

A team of 22 friends and relatives, including Erin, mum Alison and dad Garry, scaled the mountain. They have already raised more than £1,600 for the iMRI Appeal, with more donations coming in this week.

Alison said: It was hard work but Erin did amazing. To say I’m proud of her is an understatement.”

Sarah Naismith, Director of Royal Manchester Children’s Hospital Charity, said: “Erin has faced a lot of challenges with her health, so the fact she took on a new challenge – her Snowdon climb – is truly humbling to see.” 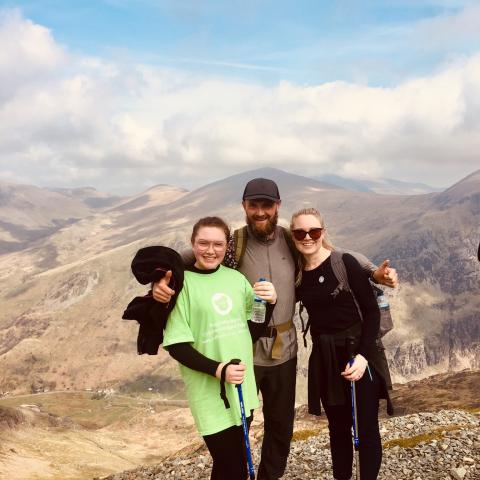