21-year-old Duncan McCombe from Bramhall has set himself an ambitious challenge to mark the 10 years since his life-saving brain tumour surgery at Royal Manchester Children’s Hospital. He’s pledged to take part in a whopping 28 fundraising events, matching the 28 days he spent in hospital post-surgery, with an aim of raising £10k over 10 months for the hospital which saved his life.

The first challenge Duncan will take on is the Wilmslow Half Marathon in March, with other events on his list being the Stirling Scottish Marathon, the Great Manchester Run – half-marathon and 10k distances, a 240ft abseil and Tough Mudder. The idea is for people to submit challenges to Duncan and then take them on with him. He wants as many people as possible to be a part of his fundraising challenge and already has friends and family members joining him for many of the events.

Duncan was just 12-years-old when, following a series of headaches and sickness, his optician advised him to visit his local hospital for a check-up. From here Duncan was blue lighted to Royal Manchester Children’s Hospital where he underwent three operations to remove a brain tumour the size of a tennis ball from the back of his head. Thankfully Duncan made a full recovery and is now devoted to supporting the hospital to show his gratitude.

Duncan comments: “I’ll forever be grateful to the incredible staff at the Children’s Hospital. Without them I wouldn’t be here today, so my respect and admiration for the work they do is on another level. Since my operation my family and I have been heavily involved in supporting the charity, but this year, for my tenth anniversary, I really wanted to give back what I can, and take my fundraising to the next level. Basically I want to try and push myself as hard as I can, take on new challenges, get people involved and raise as much money as possible.”

Duncan is keen to ‘pay back’ the hospital for saving his life and wants to raise lots of money to say thanks for the care and treatment he received.

Duncan says: “I’m a huge advocate of the NHS – I know better than anyone that you may end up needing hospital services when you least expect it, and we are incredibly lucky to have such a wonderful hospital on our doorstep in Manchester. By taking on these fundraising challenges I hope I can come closer to being able to repay the hospital for saving my life.

“The challenge I’m most apprehensive about so far has to be the 240ft abseil, as I have a massive fear of heights but it’s all worth it for a good cause! I know the first step over the side of the building will be the hardest but I’ve heard the key is trying to not look down for too long!”

Lucy Naylor, Events Manager at Royal Manchester Children’s Hospital Charity comments: “We’re delighted that Duncan has decided to fundraise once again for our hospital, and in such epic style! We’ve known Duncan and his family for years and it just shows what a remarkable person Duncan is that he is so dedicated to giving back to the hospital. We want as many people as possible to suggest unique and exciting challenges for Duncan to add to his list – the more quirky the better!”

To sponsor Duncan in his fundraising challenge please visit: www.justgiving.com/fundraising/DuncansDecade

To submit a challenge to Duncan you can submit it via Twitter (@DuncanMcCombe), Snapchat (Duncan_mcc), Instagram (Duncan_mcc). 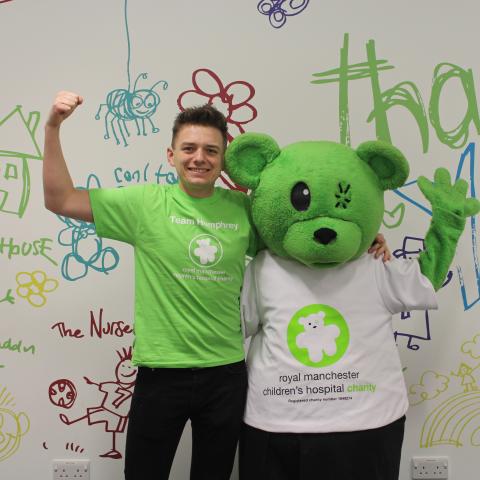