THEY might be accustomed to towering stilettos and gigantic wigs, but that’ll be nothing compared to the dizzying heights of the 19-storey abseil these Manchester drag queens are facing.

The six brave souls from Manchester’s very own Gay Village will be taking part in a “Dragseil” (a drag queen abseil) to raise money for Royal Manchester Children’s Hospital Charity.

Misty Chance, Coco, Xander Helsby, Belinda Scandal, Rosie D Vine and RuPaul's Drag Race UK star Divina De Campo are part of a daring troop of fundraisers who will be abseiling down the Hyatt Regency Hotel on the weekend of 26th and 27th June.

The abseil, known as Humphrey’s Heroes Abseil, is a regular favourite in the Royal Manchester Children’s Hospital Charity’s calendar of events and this year coincides with Pride Month. But in 2020 it sadly had to be cancelled due to the Covid pandemic. To make it even bigger and better this year, the weekend-long event now includes a Dragseil and also a Power Hour where colleagues can challenge their workmates and enjoy a team-building day out away from the office or desk at home.

Anyone who takes part in Humphrey’s Heroes Abseil, whether a drag queen, corporate group or individual participants, is encouraged to wear a superhero costume for their challenge. And this year, fundraising superheroes and corporate partner Peninsula Group will be match funding the event, so all money raised will be doubled thanks to the Manchester-based HR and employment law specialists.

This weekend, staff from Royal Manchester Children’s Hospital Charity took some of the drag queens for a look around the Hyatt Regency Hotel roof, so they could see what they were in for.

Misty Chance said: “When I actually got up there and looked down I was quite wobbly – its really high! But I think I’ll slap on a brave face on the day itself. I’ll still have a smile for the camera even if I’m scared to death inside.”

Coco said: “I’m definitely not looking forward to that first bit where you go over the edge. I hope I make it to the bottom without too many screams” while Xander Helsby said: “I hope lots of people donate, especially now I’ve seen how high it is. I’ll be happiest when I’m back on solid ground.”

Cheddar Gorgeous added: “At least we all know we’re doing it for a really worthwhile cause. You can see the children’s hospital from hotel roof. I’m glad I saw the views now as I won’t be able to see through the tears on the day!”

Dozens of places for the event have already been filled and supporters are being encouraged to sign up now to avoid disappointment. There will be two ropes at the event, so anyone who signs up has the option to “descend with a friend” too.

Included in the list of brave fundraisers happy to abseil the building and raise some much-needed funds are a team from Peninsula Group.

Alan Price, Group Operations Director at Peninsula Group, said: "Abseiling down a large building isn't for the faint-hearted, but the whole team are big fans of the children's hospital, so doing something out of our comfort zones will be worth it to raise some much-needed funds.

"When we first pledged support to the Charity back in March 2019, we wanted to raise £1million. But after we saw what staff and patients went through during the Covid pandemic, we felt very strongly about doubling that pledge to £2million.

"We can't wait to get our superhero costumes on, and we're encouraging others to do the same. Remember, whatever is raised from the event will be match-funded by Peninsula Group, so it'll be double the money and, of course, double the fun."

The abseil is part of a summer of thrill-seeking events Royal Manchester Children’s Hospital Charity has been offering to supporters. A bungee jump and skydive have already taken place, but there is still time to sign up to the abseil on 26th and 27th June and another skydive on 4th September.

Viv Williamson, Senior Events Manager for Royal Manchester Children’s Hospital Charity, said: “It feels great to be back with a bang and our thrill-seeking challenges are a fantastic way to get active, tick something off the bucket list and raise money for a wonderful cause.

“Our abseil is one of my favourite events – watching people facing their fears, cheered on by their family and friends is such a wonderful thing to see.

“I can’t wait to see some delighted fundraisers reaching the ground, breathing a sigh of relief and then enjoying the sunshine knowing they’ve done something very worthwhile for our Charity.”

To sponsor the Gay Village drag queens group visit Village Dragseil JustGiving Page and to sign up to the event yourself visit our Humphreys Heroes page. 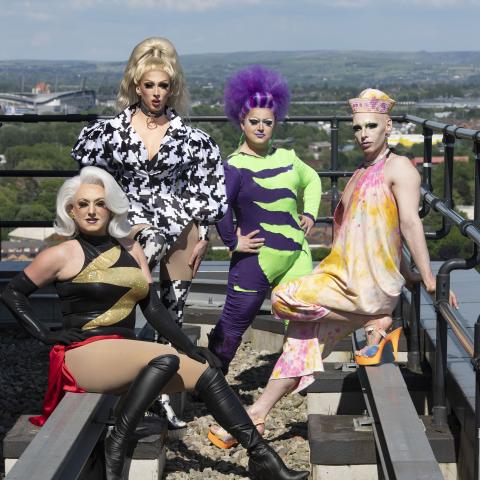