A ten-year from Levenshulme is marking ten years of treatment at Royal Manchester Children’s Hospital with a year-long fundraising challenge.

Entitled Declan’s Decathlon, the ten events will raise money for the Hospital where Declan McEntee has undergone numerous operations during ten years of treatment, which began from the moment he was born.

Born prematurely at 35 weeks with an existing lung condition, Declan was taken straight to the surgical baby unit before being briefly reunited with his mother. Within days he was admitted to the Newborn Intensive Care Unit (NICU) after being diagnosed with meningitis at just three days old. After successful treatment for that condition, Declan underwent an operation to correct a twisted bowel, during which surgeons discovered a lump, resulting in a section of his bowel having to be removed.

A short time later, at just six months old, Declan required further surgery after being diagnosed with a further rare but unrelated congenital condition called pulmonary sequestration, a lesion on the lung which can result in heart failure, infection and pneumonia.

In the nine years since, brave Declan has undergone operations to correct sleep apnea, during which his tonsils and adenoids were removed, had further surgery on his bowel, been diagnosed with asthma and had grommets fitted, all requiring further hospital stays.

Despite his catalogue of conditions, the St Mary’s RC Primary School pupil remains a happy and positive boy who is determined to repay the efforts of the staff at Royal Manchester Children’s Hospital who continue to care for him.

Declan’s Decathlon kicked off last week with a Be Seen in Green Day at his Levenshulme school, a non-uniform day in which pupils are encouraged to wear something green, the colour of Royal Manchester Children’s Hospital Charity, in exchange for a small donation.

The nine other events planned throughout this school year include a cake sale, a sponsored walk, a family charity night and the sale of charity Christmas cards, designed by Declan himself. Details are now confirmed for the second event, a Halloween disco at Longsight Cricket Club which will take place on Friday 1st November.

The money raised by Declan’s fundraising will support the Giggle Doctors at Royal Manchester Children’s Hospital. The Giggle Doctors visit the hospital’s young patients on the wards, helping to raise spirits and bring a smile in what are often stressful circumstances for the youngsters.

“The staff at the hospital have always looked after me and made me feel safe, even when I’ve been really scared. I’m raising money to support the Giggle Doctors, who I love and who have made me laugh and smile. I want to raise money because the hospital saved my life and have made me better lots of times so I want to say thank you.”

“Declan is a truly remarkable young man. To have undergone so many medical procedures at such a young age and yet remain so positive and determined to help others really is inspiring.

“We are really grateful to Declan and his family for all their efforts on behalf of the Charity and will do all we can to support them in their fundraising.” 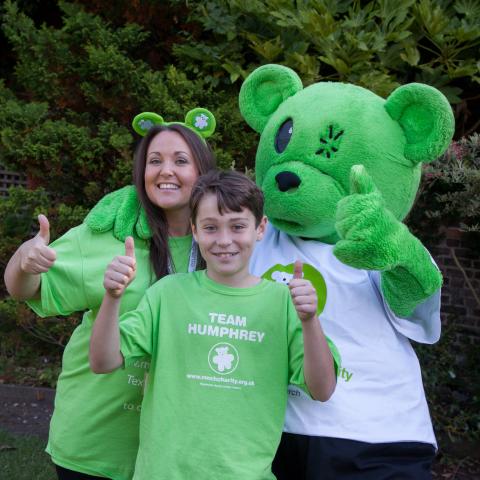