When brave Ella Chadwick crossed the finish line of the Mini Great Manchester Run last year, it was one of the most heartwarming moments of the weekend.

The nine-year-old will be back for 2017 - and this time her mum Karen is joining in on the fun, as she takes on the Simplyhealth Great Manchester Run 10k in the heart of the city centre on Sunday, May 28.

Karen will watch on as Ella, who survived 40 gruelling operations in her first six years before having a lifesaving kidney donated from her grandmother, completes the Junior and Mini Great Manchester Run on the Saturday at the Etihad Campus.

Karen will follow that by taking part in Europe’s biggest 10k running event the day after.

It is no mean feat for Karen, 36, who has never ran before, but is determined to complete her goal as she, like Ella, will raise money for the Royal Manchester Children’s Hospital Charity, which has cared for Ella since she was a baby.

Karen plans to start her training imminently for the 6.2 run, which starts on Portland Street and finishes next to Beetham Tower on Deansgate, but admits that it will be a tough task.

She said: “I need to start my training properly. I have been asking people about where is good to go running. I’m hoping one of my friends is going to sign up too so we can train together.

“I thought it was nice to do it. I thought I would never be able to do it, but if Ella can do it, I can do it. It’s a great way to raise money for such a worthy cause.

“When I told Ella I was doing the 10k, she was shocked at first. Then she said ‘you can do it’ – she’s really looking forward to coming along to support me on the day.

“I’ll be supporting her the day before, she’s excited about taking part again and that I’ll be involved as well.”

Ella, from Whitworth in Rochdale, has been a patient at the Royal Manchester Children’s Hospital all of her life after she was born with Congenital Nephrotic Syndrome, a rare illness which causes kidney failure.

She was forced to have both of her kidneys removed and up until her life-saving transplant, she faced weekly hospital trips for dialysis.

Even after her transplant in May 2014, Ella suffered from mobility problems and had to learn how to support herself on her feet.

Ella completed the Mini Great Manchester Run last year, going over the finish line unaided in what was an emotional scene for all involved, and Karen feels that her own participation in the event – which boasts a half-marathon for the first time in 2017 – is the next logical step as they once again thank Royal Manchester Children’s Hospital for the care they have provided.

“It’s hard to put into words what they have done for us,” Karen added. “They have been Ella’s lifeline since she was born, and she will need them until she’s older.

“I am looking forward to doing it, but I’m dreading it at the same time.

“I saw how much Ella enjoyed her experience last year and I can’t wait to cross that finish line.

“We have known Ella and her mum since Ella was just a little baby at the hospital, so to have them both representing our charity at the Great Manchester Run and Mini Run will be a very special day for us.

“We wish them both the very best of luck for their races and look forward to cheering them along on the day!” 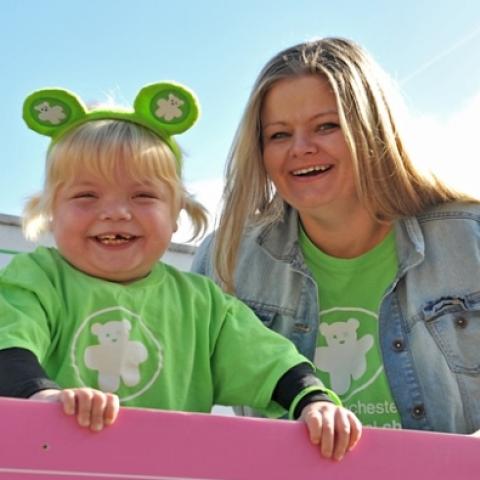