A BOY who was given just a 5% chance of survival at birth is the inspiration behind his father’s very first 10K run.

Jacob Chaddock was born just before 24 weeks, after his mum had started labour at 22 weeks. Weighing just 1lb, his mother said he better resembled a tiny, transparent chick than a baby. Shortly after birth, Jacob was diagnosed with life-threatening conditions, including meningitis, heart problems and a bleed on the brain and his parents were told to prepare for the worst.

But this “little fighter”, although still chronically ill, is now eight-years-old and is the inspiration behind his father Steven’s first ever 10K at the Great Manchester Run. The event is taking place in the city in May and Steven will be fundraising for Royal Manchester Children’s Hospital Charity.

Within the first month of training, Steven lost an incredible two-and-a-half stone and says the hard work has already been worth it.

“I’m definitely not an exercise person, but I’m going for it,” said Steven, who lives with Jacob and his partner, Jacob’s mum, Michaella Stuart in south Manchester.

“Whenever I think about giving up all I have to do is look at him – he’ll get me through anything. He pushes me.

“He has been fighting for his life since day one. He wasn’t ‘supposed’ to live – everything was against him from the beginning. But he is a fighter. There is a warrior inside that little body.

“I have diabetes and my doctors had advised me to lose weight. Raising money for Royal Manchester Children’s Hospital Charity in honour of Jacob is the best motivation ever to finally do it.”

It’s an iconic family scene Michaella and Steven once feared they’d never see. Jacob came into the world in June 2011 after the couple’s 4th IVF attempt. A previous pregnancy saw Michaella expecting twin boys. Sadly one twin was lost very early on in the pregnancy. The other, who they named Callum, was born at 23 weeks but sadly didn’t make it.

“When Jacob was born he had literally everything wrong with him,” said Michaella. “I went into labour at 22 weeks and at 23 weeks my waters broke. They managed to get me to 23 + 5 but then Jacob came along after I was in labour for 60 hours.

“After losing Callum and his brother I just knew we couldn’t lose Jacob too.

“Jacob was born this tiny, see-through little bald chick when he came into the world. He was even small for a 24-weeker. But he was fighting from day one. He was given a 5% chance of survival but we just knew he was a fighter….and he was.”

Amazingly, after 101 days in hospital, Jacob was discharged home on just vitamins. But as time went on it became clear he was unable to feed properly and, after numerous investigations and hospital stays, he was eventually given TPN (Total Parental Nutrition) – where all the nutrients a child needs are given by a liquid into their veins. He was also diagnosed with eosinophilic colitis – a rare disease in which a type of white blood cell causes injury and inflammation to the large intestine.

These conditions mean Jacob has had a number of hospital admissions and operations. His longest stay in Royal Manchester Children’s Hospital was 792 days – more than two years.

“The stay originally came about in 2017 because his gastrostomy was leaking,” explained Michaella. “He’d been getting food directly into his stomach, but it was no longer working. So that’s when the surgical team decided to fit his TPN.

“That was the best decision we ever made – he started to gain weight and he had colour in his cheeks. Although it was a long stay in hospital I’d say it was worth it for that.

“The sad side of it was that he thought hospital was his home and his life. Then when we got him home he struggled to cope and didn’t like leaving the house – he thought if we left it meant he was going back into hospital for a long time.”

Although Jacob is still often back at hospital, Michaella and Steven mostly look after him at home. He has a home school teacher come visit him, but around his lessons is a full-time regimented schedule of medications, machines and nappy changes.

Michaella said: “He has problems with his bones, mild cerebral palsy, pain in his joints, Crohn’s Disease, eosinophilic colitis and autism. In 2018 he also started showing early signs of liver failure, so he’s been put on medication for that and we have to monitor his liver very carefully.

“He has chronic diarrhoea so he goes through about 10-15 nappies per day and he still gets bad tummy pain too.

“We’ve always strived for Jacob to live as normal a life as possible. We want him to feel like other little boys and never excluded from anything. Once he asked me where my feeding tube was as he thought everyone was fed that way. So I got a tattoo on my stomach, so now he knows Mummy is the same as him.”

Like lots of children his age, Jacob loves cars and Lego figures. But because of his autism he only likes the figures that are smiling – the frowning or angry faces upset him. Michaella added: “He doesn’t like superheroes or remote-controlled cars because he doesn’t like the idea of them moving on their own. But he does like Disney princesses like Rapunzel. He also loves green – which is why he is very happy Daddy will be running the 10K in a green Royal Manchester Children’s Hospital Charity T-shirt.”

Steven will be lacing up his trainers with a number of team mates, including family and friends. His initial target is to raise £792 – a pound for every day of Jacob’s longest stay in hospital. However he hopes to smash this target and raise in excess of £1,000.

Sarah Naismith, Director of Royal Manchester Children’s Hospital Charity, said: “It’s incredibly moving when we hear of families who are willing to fundraise for us and find time to train around a busy schedule of caring for their child.

“Great Manchester Run is a very exciting event for us and we hope this year’s will be even bigger and better.”

The support of Royal Manchester Children’s Hospital Charity means we can provide additional resources that make life easier for patients and their families who use the hospital.

Our charity has three main areas of work:

The Great Manchester Run 10K and Half Marathon will be taking place in the city centre on Sunday, 24th May. The children’s mini and junior events are taking place the day before at Sportcity.

To help support the family's fundraising, you can visit Steven’s JustGiving Page.

Find out more about how you can take part in the Great Manchester Run and raise funds for Royal Manchester Children’s Hospital Charity. If you'd like to take part but raise money for a different hospital within our family of hospitals, please click here for our MFT Charity website. 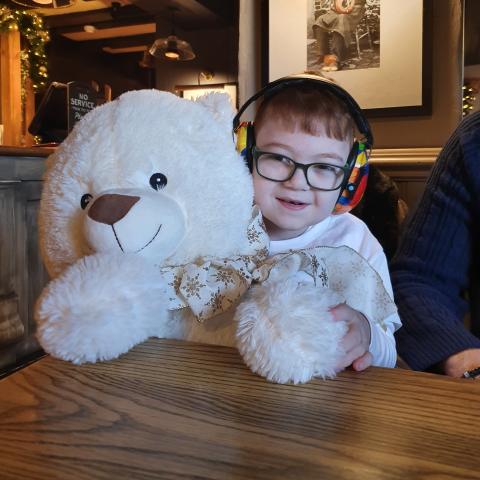