A dad from Bolton will be taking fundraising to new heights when he abseils down a 240ft building in Manchester city centre, to raise funds for the hospital where his little boy Ted, aged 13 months, is being treated for a brain tumour.

Danny Waring will be taking on the challenge with his two friends Justin Torkington and Mark Gibson to help raise awareness and fundraise for brain tumour research at Royal Manchester Children’s Hospital.

Danny’s son Ted was just seven months old when he was diagnosed in September 2016 with a brain tumour located in the centre of his brain. Ted had really been poorly and struggling to keep his food down and after a doctor’s appointment he was referred for an MRI Scan at Royal Bolton Hospital, the results of which turned the family’s world upside down.

Following the MRI scan Ted was transferred to Royal Manchester Children’s Hospital for treatment and has since had nine operations, three months of chemotherapy and has had a shunt fitted which relieves pressure on the brain by draining excess fluid.

The operations have successfully removed 70% of the tumour and Ted will start another round of chemotherapy any day to help shrink what is left of the tumour.

Danny comments: “What my family and I have been through over the last six months has been nothing short of a living nightmare, but we’ve had to keep strong for Ted. He’s been so brave and has taken his treatment and operations in his stride. Even with everything going on he’s still managing to smile at us which is just remarkable. All we are focused on now is the last round of chemotherapy and hoping that this completely removes the last of the tumour.

“Throughout all this the hospital has been amazing and I can’t thank the staff enough for everything they have done for Ted. That’s why I decided to take on this abseil challenge, to raise awareness and money towards brain tumour research to help other families like ours who are going through a similar situation. People think I’m brave taking on a 240ft abseil but it’s absolutely nothing compared to the bravery Ted has shown. Any fears I may have on the day will be wiped away when I think of why I’m doing this, and having my mates with me will help me out!”

Danny and his friends will be taking part in the charity ‘Humphrey’s Heroes’ abseil on Sunday 14th May when they will be joined by over 100 participants abseiling down Liberty Living owned Liberty Heights in Manchester City Centre to help raise funds to support the Children’s Hospital.

To sponsor Danny in his abseil visit his justgiving page: www.justgiving.com/Danny-waring1

There are a limited number of places left for the Saturday and Sunday Abseil, to register CLICK HERE 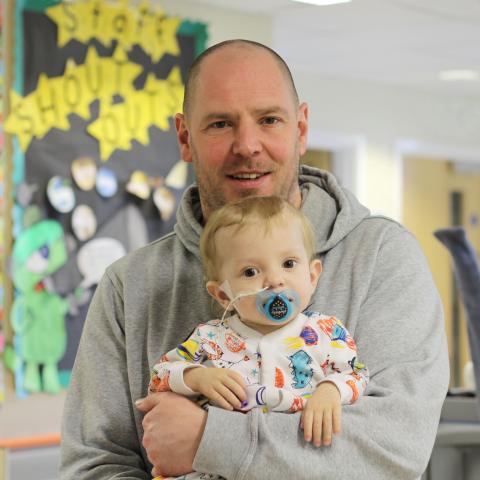