Annie-May Johnson from Southport and friends from across the country came together to raise a staggering £32,620.79 for the North West Transportation Service (NWTS), all in memory of Annie-May’s brother, Adam.

Adam was 18 years old when he sadly passed away, he suffered from an incredibly rare birth defect, Schizencephaly, which involves clefts in the cerebral hemispheres of the brain. Annie May’s sister, Rachel, also suffers from the condition.

Led by Annie-May, the group of 13 friends undertook a London to Paris cycle to help fund a Rapid Response Vehicle for the NWTS team. Annie-May was joined by fellow 3rd year students from Oxford Brookes, Northumbria, Newcastle, Exeter and Manchester universities.

NWTS, which was formed in November 2010, is a team of Paediatric Intensive Care doctors and nurses who stabilise and transport very ill children, who are admitted to their local hospital throughout the North West of England and Wales, to specialist children’s hospitals including the Royal Manchester Children’s Hospital and Alder Hey Children’s Hospital. The service’s two modified ambulances require specialist equipment suitable for the treatment and transfer of very young infants, each individual piece of equipment costing tens of thousands of pounds.

Setting off on 8th of April 2015 the team reached Paris in 4 days. The girls said that the challenge was much harder than they initially thought and it was also remarkably warm for that time of year! On reaching the Eiffel Tower the group were met by many family and friends including Annie-May’s parents Merriel and Shaun. Understandably it was an emotional reunion on French soil with there not being a dry eye amongst them all.

The NWTS service, which is hosted by Royal Manchester Children’s Hospital, is a service very close to Annie-May’s heart, as she explains:

“On the 18th March 2014 my little brother Adam unfortunately required the NWTS service. They provided Adam with an intensive care facility on wheels, whilst transferring him from Southport to Royal Manchester Children's Hospital. Not only did they give Adam the bespoke care he needed to survive the journey, they ensured the critical information needed to proceed with his care did not slip through the frantic cracks at either end of his transfer, ensuring he would receive the best care possible.

If it wasn't for NWTS Adam would have never made it to the Pediatric Intensive Care Unit at Manchester where he could be further treated. It was NWTS who provided enough time for loved ones, such as myself to reach Adam for what we sadly knew would be the last few hours of his life.”

“We are incredibly grateful to Annie-May and her friends from across the whole of the country for coming together to raise such a wonderful amount of money. The NWTS service is absolutely vital in transporting extremely poorly children from across the whole of the North West and North Wales. Their fundraising will make a valuable contribution in ensuring the service can be the best it possibly can be.”

Annie-May wants to make a special thank you so Timberwise, Bistro Verite, Johnsons Churchtown, Muse ladies' clothing and Dovehaven Care Home in Southport, for their generosity in sponsoring the challenge. 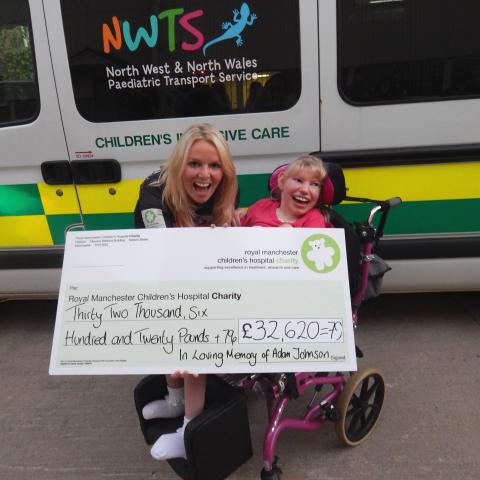