Joel Turner, a Post Doctorate Research Associate in Nuclear Fuel from Timperley, and colleagues James Buckley and Prof Tim Abram from West Didsbury will be cycling from Paris to Royal Manchester Children’s Hospital to raise money for the hospital which cared for Joel’s baby son, Harry.

The group of scientists, who work at the School of Mechanical, Aerospace and Civil Engineering at the University of Manchester will set off from their hotel close to the Eiffel Tower on the morning of 11th June, reaching the children’s hospital on 17th June  after pedalling an impressive 400 miles. Welcoming them back to their home city will be Joel’s wife, Amy, Harry and eldest son Jake.

In December 2013 Harry was born with a Sacrococcygeal Teratoma, a tumour at the bottom of his spine, discovered in a scan shortly before he was born. The family’s care was then transferred to sister hospital, Saint Mary’s. Amy was induced and Harry was born two weeks early on 4th December 2013, following which he spent 2 weeks on the Neonatal Intensive Care Unit.

After a brief visit home, at just 13 days old Harry went through major surgery to remove the tumour. Part of Harry’s spine was also removed to hopefully prevent its regrowth. He spent a further week on the High Dependency Unit (HDU) and was released from hospital the night before Christmas Eve, as dad Joel says, a very close call!

Harry featured on the Channel 5 documentary which aired last December called ‘The Kid’s Hospital at Christmas’. The programme followed patients at the hospital over the festive period. Harry’s story was particularly concerning due to the risk of severing an artery in the process of removing the tumour as well as the possibility of it not being extracted whole. Joel and Amy credit Mr Ross Craigie for carrying out the ‘amazing’ procedure.

Now a happy and healthy little boy Harry has made a fantastic recovery although as dad says he now has a ‘wonky bum’ which means he now toddles comically! Harry has check-ups with Mr Craigie every six months and will be under his care for a number of years.

James, a PHD Student and Tim, the Westinghouse Chair of Nuclear Fuel, did not hesitate when Joel asked them to take part in the cycling challenge to raise money for the hospital which treated Harry.  While James has undertaken long rides before, this will be by far the longest and is a completely new experience for the others, Joel more used to his 8 mile commute to the university each day!

“The first month of Harry's life was by far the hardest time in my life, and through it all the staff and volunteers at Royal Manchester Children’s Hospital were incredible, taking care of Harry and us whenever we needed it, lifting our spirits and most importantly giving me a healthy happy son. Harry has check-ups every few months to check for signs that the tumours coming back, but so far everything looks good.

We can't thank the hospital enough - by doing this ridiculous bike ride I'm really hoping to raise enough money to allow them to continue going above and beyond, providing the little extras that make such difficult times that bit easier to cope with. Things like the light show in the ultrasound department, to let us distract Harry while he has his regular scans, or the toys and games in the outpatients waiting area. They're an amazing place and they deserve to be supported.”

All money raised through sponsorship will be supporting the High Dependency Unit and Radiology at RMCH and the Neonatal Intensive Care Unit next door at sister hospital, Saint Mary’s. So far the trio have raised over £1500 with more donations still to come.

“We’re so excited to welcome the trio back to the hospital where it all started at the end of their journey, what they are undertaking is a huge challenge and we wish them the very of luck. We are thrilled to hear that Harry is now doing so well. I know how many people were touched by his story when the documentary was aired last December”

To sponsor Joel, Tim and James visit: https://www.justgiving.com/Manchester-to-Paris-Ride/ or text PAMR91 and donation amount to 70070. 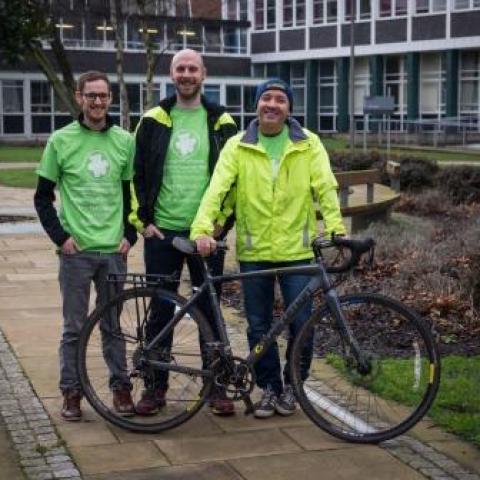