Part of the winning quartet in cycling’s Team Pursuit at the Beijing Olympics in 2008, Manning also has a string of individual and team pursuit national and world titles to his name, accrued throughout a remarkable ten year career.

Now an integral part of the coaching staff responsible for the phenomenal success of British cyclists at last year’s London Olympics, Paul has opted for a sporting challenge of a very different kind, swapping two wheels for two running shoes to take on the grueling 26 mile course on Sunday 21st April.

Paul has been a regular supporter of Royal Manchester Children’s Hospital in recent years, pledging to take part in this latest sporting challenge in recognition of the care received there by both his young daughter and the children of a number of close friends. He said:

“Whatever your background, career or successes, every family will sometimes face the pain and anxiety of a loved one becoming ill and requiring medical treatment. The staff at Royal Manchester Children’s Hospital are genuinely remarkable, providing excellent care and reassurance in equal measure to help support the parents of young patients at such a stressful time. I hope the sponsorship I can raise by participating in the Marathon can help to make a small contribution to the outstanding work done here on a daily basis.”

“Paul has achieved so very much over an incredibly successful career, he should be an inspiration to every other runner taking part in the Marathon. We are both delighted and proud that Paul has chosen us as the beneficiaries of his fundraising and wish him every success in both this and his future career challenges.” 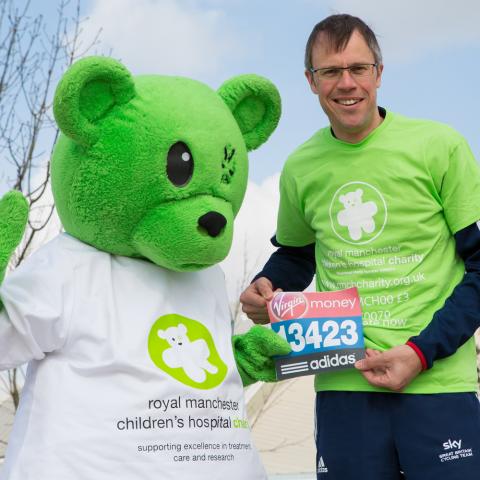