On 18th April the Cubbin family from Wigan will be donning their capes to run through the neon fields of Heaton Park in Manchester’s latest 5k – the Moon Rise Run.

Ian and Jane Cubbin, joined by eight friends, will be running in aid of Royal Manchester Children’s Hospital Charity (RMCH Charity) after their three year old son, Josh, was treated at the hospital last year - RMCH Charity is the official charity partner of the Manchester Moon Rise Run.

Josh was diagnosed with Burkitts Lymphoma on 22nd April 2014; for the next three months Josh’s home was Ward 84, the children’s cancer ward at the hospital. The team of runners, inspired by Josh’s story, will be dressed as superheroes, as a tribute to all of the children who have battled cancer on the ward.

Jane explains: “The costumes are still in the planning stages but expect to see Superman, Superwoman, Batman and Batgirl, amongst others. Children who have fought or are fighting cancer are the true super heroes and we wanted to reflect that. They fight with such courage, bravery and determination; they are all inspirational.  Every night we tell Josh that he is our hero and he did so well fighting the baddies.”

“Josh is probably still a little young to fully understand about the run but despite how poorly he was he loves RMCH and loves us doing stuff for the hospital which made him better. I think he will be very impressed when he sees us dressed as superheroes!”

Joining Ian and Jane will be Tracy and Martin Gore, Gill and Andrew Finch and Julie Wilkinson from Wigan, along with Jeanette Stone from North Manchester and Mel and Brian Leeming from Clitheroe.

Jane says: “Our friends were amazing in supporting us through Josh’s cancer diagnosis and treatment. It means so much to us that they want to support the hospital which saved our son’s life.”

Moon Rise Run will take place on 18th of April at Heaton Park and will transform a 5km course into an enchanting and illuminated passage across the park. Each runner will be given an LED Moonbeam wristband which will help to light up the course. Once crossing the finish line runners will be greeted by an uplifting festival field where participants and their guests can enjoy high quality street food and a range of live music performances.

Jane and Ian say that they jumped at the chance to be involved when they heard about the run and were thrilled to hear that the Moon Rise Run is supporting a charity so close to their hearts. They will also be joined by other families from Ward 84 as they unite to raise money for the hospital.

“We are really looking forward to being part of the Moon Rise Run.  It certainly sounds like an amazing night and no doubt one that will be very special and memorable.  The run is taking place almost a year to the day that we received Josh’s cancer diagnosis and it is a perfect time to reflect and celebrate how far we have come in that time.  We were so thrilled that RMCH Charity is the charity partner and we knew that we had to be involved.”

“It is going to be a special and emotional night to be side by side with all the families and some of the brave children we met on Ward 84, all coming together and running for a charity that is so special to us all. It has also meant a lot to us that our friends have come together to be part of a team to make a difference for the hospital and all the children it treats.”

“Our goal is to raise as much money as possible for this amazing hospital. We also want to recognise our little boy and all the children in the hospital and to show the world that they are all are true superheroes.”

“We are really passionate around raising money for RMCH Charity and I know we always will be.  We first started fundraising for the hospital with their “Be Seen in Green day” last year and we’ve been involved ever since. We would do anything to support the hospital that looked after us during Josh’s cancer journey and of course who saved our precious boys life.”

Hannah Thomas, Events and PR Manager for Royal Manchester Children’s Hospital Charity, added: “We are thrilled that so many of our patients and their families are taking part in the Moon Rise Run to raise vital funds for somewhere which means so much to them. Ian and Jane are remarkable people and their dedication to fundraising for Ward 84 truly shows what kind-hearted people they are. We are also very grateful to their friends who will be joining them on the night. Money raised for Ward 84 will aid the enhancement of the ward, making the ward a much more comforting and bright place for patients.”

The Moon Rise Run will start at 7.45pm with entry from 5.30pm, and warm up at 7.15pm. The post-race festival will end at 11pm. Tickets for single entry, groups, and festival-only are on sale now. For more information please visit www.moonriserun.com . If you would like to opt-in raise funds for RMCH Charity there is an option when registering on the site 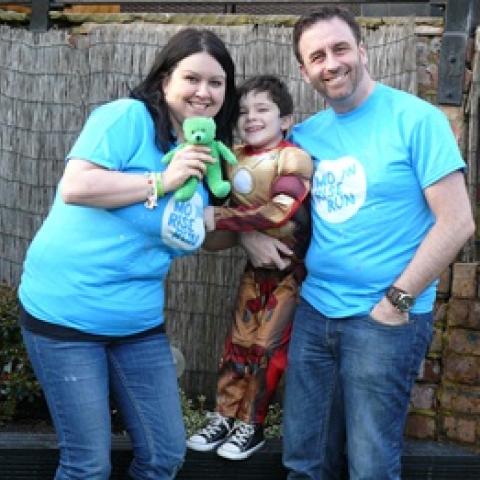