Coronation Street comes to the Children’s Hospital this Christmas Time

Yesterday Coronation street stars visited Royal Manchester Children’s Hospital to hand out presents to some of the hospital’s poorliest patients and to spread some festive cheer.

Taking time out of their busy filming schedules were on-screen couple, Fizz and Tyrone, played by charity supporter Jennie McAlpine and Alan Halsall. The pair spent their time on Ward 84, the children’s cancer ward at the hospital, which looks after young patients with the condition from across the whole of the North West.

The visit was particularly special for them as their on-screen daughter, Hope, is currently battling Neuroblastoma, a particularly gruelling childhood cancer. Currently on screen the couple are preparing for Christmas Day with their poorly child.

Jennie first visited Ward 84 in August when she spent time on the ward learning what life is like for young children suffering from the disease. She spoke to a number of parents who are in the same position as her on-screen character and also recorded a short piece whilst there for This Morning, highlighting what life on the ward is really like.

Whilst on Ward 84 Jennie and Alan caught up with many children, including three who were also inpatients back in July, before saying hello to the children on the Bone Marrow Transplant Unit.

Royal Manchester Children’s Hospital Charity patron, Antony Cotton also came along to the hospital to spread some festive cheer. Antony, who plays the lovable barman, Sean Tully, handed out gifts and spent time chatting with children and their parents on Ward 85, the hospital’s respiratory and heart ward.

Antony then delighted children by joining in the inpatient’s Christmas party, chatting to both children and their parents in the Play Centre.

“Alan and I loved spending time visiting the patients on Ward 84, it was really special being able to  chat to some of  the children I first met on the ward back in July. Although it must be incredibly difficult for the children and their families over the festive period, while we dropped off presents from Santa, everyone we met had a smile for us. It was an inspiring afternoon.”

“We are incredibly grateful to Antony, Katie, Alan and Katie who took time out of their busy filming schedules to visit our poorly patients. Spending time away from home can be especially difficult for our young patients and their families at Christmas time. Visits like this really do spread some festive cheer and provides a welcome distraction for the children.

“We would also like to say a huge thank you to SAMBRO for their support again this Christmas. We really do appreciate their generosity in providing gifts for our patients; their presents always put the biggest smiles on the children’s faces.”

A variety of presents were kindly donated by the toy company. SAMBRO, based in Bury, specialise in licensed ranges that encompass a wide range of different product categories including toys, arts & crafts, stationery, bags and wheeled goods. 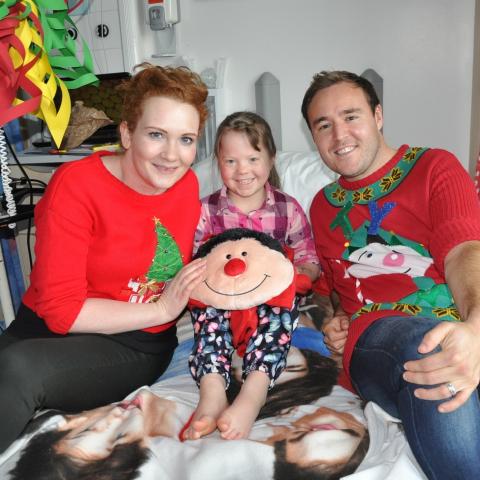