Consultant and Patient duo to help push fundraising over £1million

Over the past 10 years the charity has raised an impressive £860k from the Great Manchester Run, and this year Royal Manchester Children’s Hospital Charity aims for fundraising to top the £1million mark.

Brooke, 14, from Lostock, has previously run the Manchester Mini & Junior Runs six times and this year will be old enough to take on the Manchester 10k for the first time. The run will be a huge milestone for Brooke who underwent major surgery in July 2014 to straighten her spine. The condition, known as Congenital Spondylolisthesis, is a birth defect which means the spine slips out of place, titanium screws and rods then have to be inserted to hold the spine in place.

Following the surgery, to ensure the operation was as successful as possible, Brooke was imposed a ban on all sports and physical activity until after the bone graft has fused. Missing out proved a challenge for the teenager who has a huge love of sport. Brooke has now set the Great Manchester Run in May as her target to work towards.

“After my spinal surgery I found it so difficult to take a break from participating in all the sporting activities which I love, which will make running in the Manchester 10k that extra bit special. I’ve taken part in many sporting fundraisers for the hospital before, yet now I am old enough to run the 10k it has made me even more determined to take on the challenge. Knowing that Mr Bruce will be running with me, and knowing my sponsorship will help contribute towards the £1million mark will really spur me on!”

Running alongside Brooke on the day is Clinical Head of RMCH, Jim Bruce, who first operated on Brooke when she was just a small baby, as Brooke was born with a rare pelvic tumour.  Jim, who was named top doctor at the WellChild Awards 2012, has watched Brooke grow up over the years as she has frequently been a patient at the hospital. Jim is keen to help the charity reach the £1million mark in 2016 and will be sporting the lime green shirt of Royal Manchester Children’s Hospital to show his allegiance to the Charity.

“As Clinical Head of RMCH I wanted to show my support for the charity by taking part in this year’s Great Manchester Run.  It’s incredible to see just how much money has been raised so far from the running event over the years. I get to see first-hand the huge difference that charitable funds make at our hospital and want to contribute towards this fundraising.  I’m especially looking forward to running alongside Brooke on the day. Brooke has been a patient at our hospital for many years and never lets her health stop her from taking on any challenge, which is really inspirational. Together we hope to raise lots of money to support RMCH charity.”

“It is amazing that our supporters taking part in the Great Manchester Run have raised such a significant sum of money for our hospital. There is no doubt that the Great Manchester Run has directly contributed to helping make sure Royal Manchester Children’s Hospital isn’t just the largest children’s hospital in the UK. I’m delighted that both Brooke and Jim will be representing our charity on the day. No matter what challenges are thrown at Brooke she takes it all in her stride and it’s very fitting that Jim will be running alongside her on the day. We wish them both the very best of luck for the race and hope many others will join suit to help us top the £1million mark in 2016!” 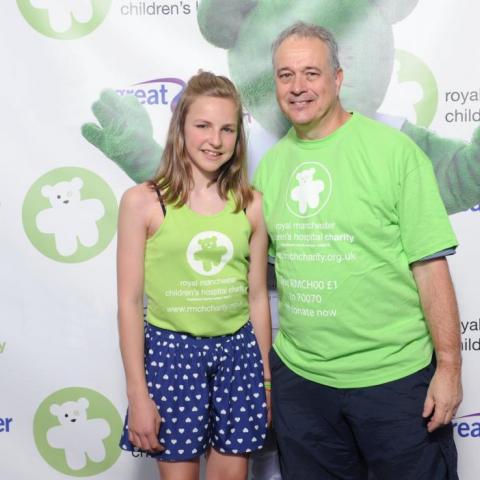