Companies Take to the Road in Big Charity Drive

On Monday 20th October, 22 teams participating in the Big Charity Drive will ‘race’ from Stockport, Greater Manchester to its twin town of Béziers in the south of France, all proceeds raised from the ‘Top Gear’ style driving challenge going to Royal Manchester Children’s Hospital Charity’s, Many Hands campaign.

The challenge will see competitors drive the 957 miles, all in cars bought for less than £500. Following the Big Charity Drive, all vehicles will be donated to RMCH Charity and auctioned off to raise money for the refurbishment of the specialist Burns Unit at the hospital. The drive will take on several challenges along the route with teams having points deducted for refuelling, breaking down and taking breaks – the winner will not necessarily be the quickest to complete the journey.

All vehicles will be GPS tracked and live video footage of each team will be streamed online. After the event, awards will be presented in a number of different categories at an exclusive awards evening at the Midland Hotel, including ‘The Spanner’, for the team that breaks down the most and ‘The RMCH Cup’ for the team which raises the most amount of money.

The Big Charity Drive is the brainchild of Stockport based web development company, Minted Melon, who came up with the challenge as part of RMCH’s Many Hands Campaign. Company directors, Will Gill and Heather Stewart will be taking to the road themselves in a Saab 95 bought for £400. Joining in on the action will be Joel Oxberry, Corporate Fundraising Manager for Royal Manchester Children’s Hospital Charity. With no sat nav or Googlemaps permitted, the charity team are hoping Joel will make it back to work without getting lost in the French countryside!

Other teams taking part in the challenge include, Manchester based Adam Recruitment, RBS Corporate Banking, Online Ventures Group, Nothing but Epic and Greater Manchester based Gary Chaplin, Com Systems and HR Heroes

Many Hands was launched by Dragon’s Den star and celebrity entrepreneur Theo Paphitis and asks 50 companies to pledge to raise £1,000 each for the refurbishment of the Burns Unit at Royal Manchester Children’s Hospital.

“We are delighted so many teams have joined The Big Charity Drive, the support from Greater Manchester businesses has been overwhelming. This event has captured the imagination and excitement of businesses across the district”

“I’m so excited to be involved in the Big Charity Drive. This challenge is one of a kind and its fantastic how so many companies have become involved. A special thanks goes to the team at Minted Melon who have made the challenge possible.” 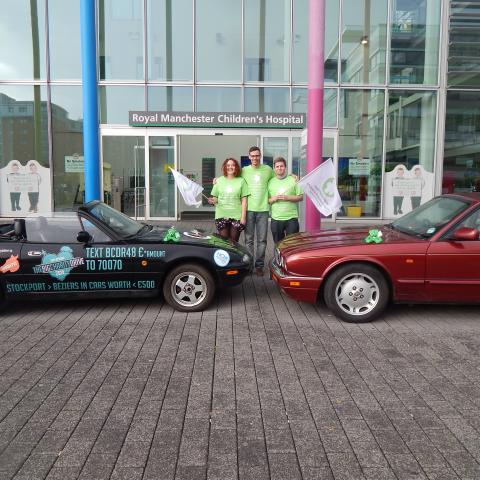