Companies Pitch to Theo Paphitis at Many Hands Finale

We recently held our Many Hands Campaign finale at The Midland Hotel, Manchester.

The campaign, spearheaded for the fourth time by renowned businessman Theo Paphitis, has raised £46,000 from 21 participating companies since its launch in March, with money still coming in. Following an impressive pitch to the judges, the famed Dragons’ Den star announced executive head hunter Gary Chaplin as the winner of Many Hands 2016.

The Many Hands finale saw four shortlisted companies pitching wonderful initiatives ranging from directors selling themselves as chauffeurs and PA’s to charity festivals and gruelling cycle challenges. Winner Gary impressed judges when he took to the stage to present and then stripped on stage to reveal his cycling outfit before getting on his bike to complete his pitch about his Everest Cycle Challenge.

The other shortlisted companies were:

Joining Theo Paphitis on the judging panel were David Cain, Deputy Chairman of the Charity’s Fundraising Board, Managing Director of Wolfe, Laura Wolfe, and Head of Events for Downtown in Business, Roger Jonas.

Commenting on the Campaign, long-term supporter of the Charity, Theo Paphitis, said:

“The Many Hands Campaign is a great initiative that allows companies to use their ingenuity to help a worthwhile cause.  I really enjoy being involved and being a judge for the campaign as it generates such diversity in fundraising ideas.  As well as having loads of fun, whether creating a milkshake, getting on a bike or taking on a new role, companies get a great opportunity to engage with their communities and gain a huge sense of pride in what they have achieved.”

David Cain, Deputy Chairman of the Charity Fundraising Board added:

“We are extremely grateful to all the companies that got involved in our Many Hands Campaign, helping us to make a difference.  They have been working hard coming up with fantastic fundraising ideas and it is nice to celebrate and share their achievements in support of our Time Saves Lives Helipad Appeal.”

Commenting on his win Gary Chaplin said: “I am absolutely thrilled to have won the Many Hands Campaign. I was a little bit nervous about pitching to Theo Paphitis but once I stripped off and climbed on my bike my nerves melted away and I could focus on sharing the enormous Everest Cycle Challenge we had taken on. At the end of the day it’s not about me it’s about the business community pulling together with the real winner being Royal Manchester Children’s Hospital Charity for their hard work in trying to make a difference.”

The annual campaign, which first launched in 2008, encouraged North West businesses to support the charity by signing up to a fundraising target of £1,000 each over the course of three months. This year the Many Hands Campaign was sponsored by Ryman Stationery and Seneca Partners.

Monies raised by this year’s campaign will go towards the Charity’s Helipad Appeal. The Helipad Appeal will enable the creation of a brand-new 24-hour access primary helicopter landing site, the first of its kind in central Manchester. Currently, Royal Manchester Children’s Hospital, along with its co-located sister hospitals Manchester Royal Infirmary and Saint Mary’s Hospital, rely upon a secondary landing site in a nearby park, an arrangement which means that patients initially transported by air ambulance must then be transferred the final mile of their journey by land ambulance. The onsite helipad will allow the hospitals to save many more lives and will increase the chances of a full or improved level of recovery in a great many seriously ill or injured patients. 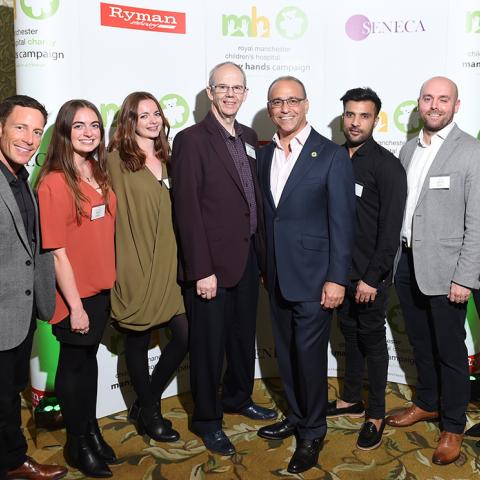