XFM DJ and keyboardist for Manchester’s Inspiral Carpets, Clint Boon, has rounded up the troops to form a Boon Army of runners for this year’s Great Manchester Run.

Clint will be overseeing the army which will be made up of celebrity runners and musicians, as well as members of the public who wish to sign up for the Great Manchester Run Boon Army.

Heading up the recruits for Royal Manchester Children’s Hospital Charity will be legendary Mancunian guitarist, Peter Hook. Peter, or ‘Hooky’ as he is also known to fans, is best known as bassist in seminal 80’s band Joy Division, as well as New Order and more his most recent band, The Light. Peter, a firm friend of Clint’s decided to join the force after Clint told him of the vital work the children’s hospital undertakes on a daily basis.

“I’ve been doing the Great Manchester Run for 9 years now and I am thrilled to be running for Royal Manchester Children’s Hospital Charity this May. From Clint’s experience of the hospitals I know how important fundraising is in providing the very best care for poorly children. Being born and bred in Salford I am always hearing the excellent work they do and I am proud to part of the Boon Army.”

Captaining those running for Saint Mary’s Hospital Charity will be Clint’s wife, Charlie Boon. Mrs Boon, along with her mum, Jill and friends Lucy and Rob Snowden will be running in support of the hospital which is very close to their hearts.

In April 2012 Clint and Charlie’s daughter, Luna Bliss, sadly lost her life after 34 days. Since then the Boon family, along with friends and supporters, have raised over £37,000 for the Saint Mary’s Neonatal Intensive Care Unit where Luna was cared for. Originally raising funds to purchase specialist chairs to enable new mothers to feel comfortable when having skin to skin contact, or ‘Kangaroo Care’ with their babies, the Boons have gone on to raise further funds for the neonatal unit.

“I’ve been djing on the ‘Boon Army stage’ at the half way point of the Bupa Great Manchester Run for several years now. Hand on heart, it’s always the highlight of my djing calendar. It’s hard to put into words the overwhelming feeling of seeing over 40,000 people devoting so much energy, passion and love into their various personal causes. Each runner has a special and unique story.

This year will be extra special for myself and the Boon family. For the first time, my wife Charlie and my close friend Peter Hook will be leading the ‘Boon Army’ team of runners in memory of our baby girl Luna Bliss who was cared for at Saint Mary’s during her very short time with us. Many of our family and close friends are taking part along with some familiar faces from the world of showbiz to raise funds for Saint Mary’s and  Royal Manchester Children’s Hospital. Please join us. ”

“Over the next few months I will be encouraging my celebrity mates and XFM listeners to sign up to my Great Manchester Run Boon Army. It will be great to see so many recruits taking to the streets of Manchester, all raising money to support the work two amazing hospitals. Saint Mary’s Woman’s Hospital and RMCH are located side by side to ensure the highest level of treatment for babies and children from across the region – that’s good innit!”

This year the Great Manchester Run is being held on Sunday 10th May 2015 and is now open for entries. Each year more than a quarter of a million runners take to the streets of Manchester in Europe’s largest 10k run.  Royal Manchester Children’s Hospital Charity is delighted to be the nominated charity for the second year running.

Hannah Thomas, Events and PR Manager for the charities, added:

“We are thrilled to be teaming up with Clint to create a Boon Army of runners for this year’s Great Manchester Run. Clint has been a supporter of our hospitals for many years now and with his help we are hoping for our biggest and best yet. We have people from all different backgrounds take part, whether they are established runners or fancy a new year challenge so why not give it a go and become part of the Boon Army.”

If you would like to take part in the Great Manchester Run, the charity currently have a limited number of guaranteed entry places available for a reduced fee of £20. To apply for one of these places, or to find out more information please call 0161 276 4522 or email charity.events@cmft.nhs.uk.  You can use these places to support Royal Manchester Children’s Hospital or Saint Mary’s Hospital (or both if you wish!).

If you would prefer to get your own place through the race organisers and would like to run for Royal Manchester Children’s Hospital Charity tick the box when registering for a place on the Great Run website. 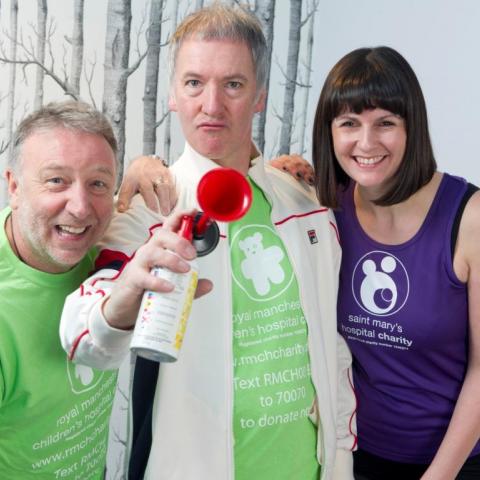