Players from Manchester City’s first team sprinkled a touch of Christmas cheer to hundreds of children at the annual visit to Royal Manchester Children’s Hospital.

Led by skipper Vincent Kompany, players including Yaya Toure and Joe Hart arrived at the hospital on Tuesday afternoon to experience first-hand how the hospital provides specialist healthcare services for children and young people from across the North West and beyond.

Upon arrival, the players split into small groups, armed with hundreds of presents to hand deliver to every young person in the hospital. In the ‘teenzone’, one group of youngsters were taking part in a Christmas Foosball tournament with MCFC mascot Moonbeam, unaware that Vincent and Yaya would surprise them with a sack full of presents for the area including DVDs, games, boom boxes, an a couple of games consoles.

“I have visited the Royal Manchester Children’s Hospital several times now and every year I am humbled and inspired by the bravery of each child I meet. It’s a difficult time of year to be spending in hospital, but the staff and volunteers do a wonderful job and hopefully the children have enjoyed today. We do a lot with the hospital and so it’s an important and rewarding part of the players’ calendar!”

“We are incredibly grateful to the Club and for the players who each year take the time to visit our patients, spreading some festive cheer. It really does put a smile on the faces of those children who find themselves in hospital over the Christmas period, The support we have received over the years has really helped us to make a difference to a child’s time in hospital.” 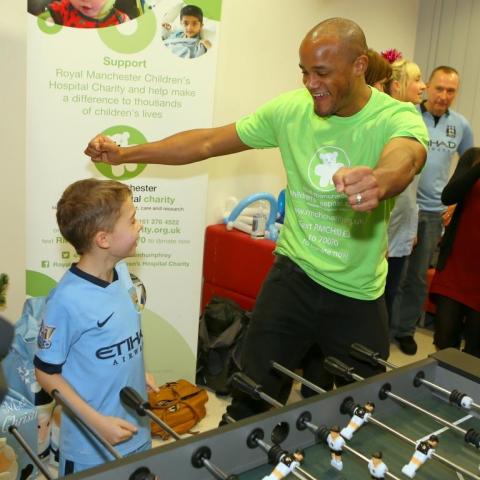