Royal Manchester Children’s Hospital Charity (RMCH Charity) recently ran a competition in conjunction with Brodericks Love Coffee which asked patients to design a festive Christmas cup. The winning design will be used in all Brodericks vending machines for the duration of December.

Patients from across all wards in the children’s hospital enthusiastically got designing the ultimate Christmas scene to feature on the cups.  The only criteria was that the design was as colourful as possible and featured charity mascot, Humphrey bear.

The Charity received a wide range of designs from snowy scenes to Humphrey on the wards at Christmas. After careful consideration the charity sent the shortlisted designs to John Broderick, Managing Director of Brodericks Love Coffee, and Mike Gardiner, Director at cup manufacturers F Benders.

The lucky winner who depicted Humphrey visiting patients on Ward 84, the children’s cancer ward was patient Charming Seyi-Abiodun from Gorton in Manchester. The 10 year old chose to draw the mascot spreading festive cheer and delivering presents to patients.

Charming’s design will be featured on all cups in Broderick Love Coffee’s 900 vending machines across the region, reaching as far south as Stanstead.

The coffee company are encouraging each person who buys one of their coffees over the festive period to donate £1 to the charity. The cups feature a bespoke text to donate code making it quick and easy to support the hospital this Christmas.

Brodericks Love Coffee provide refreshment services for business and public locations. It is a family firm established 45 years ago by founder John Broderick and is now run by sons Johnny and Peter. With a turnover in excess of £14m and employing around 130 people, the company was known as Manchester Vending Services Ltd., but was officially rebranded as The Broderick’s Group in November 2014.

“We are delighted that Brodericks have given our patients the chance to be involved in such an exciting competition. Drawing and arts and crafts are encouraged within the hospital as they act as distractions for patients who are often in hospital for a long time. We are really looking forward to seeing our Charity’s logo on the cups in every one of Broderick’s coffee machines; it really does help to spread awareness of the hospital across the region and beyond.”

'They say that 'charity begins at home' and this Christmas, for the first time, we're going to use, in all our machines, a specially commissioned festive cup that focuses on a  charity that's touched a lot of lives locally. Royal Manchester Children’s Hospital is just a short drive from our offices, but it is of national importance and it's a privilege for everybody at Broderick's to be associated with it.’

‘It genuinely is a Charming design and the design will be featured on 300,000 cups in Broderick Love Coffee’s 1000 hot beverage machines across the country. I’m sure Charming’s design will galvanise supporters to reach into their pockets or purses.' 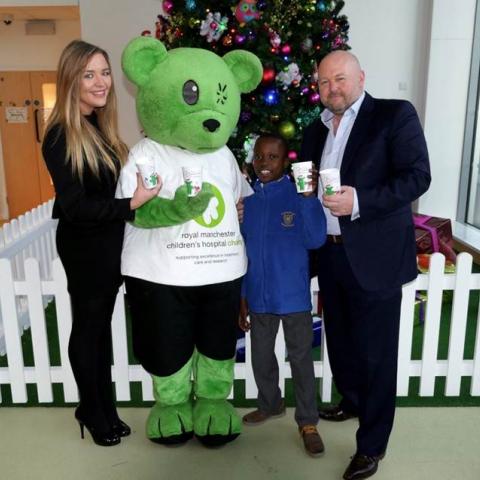