A STRING of serious illnesses mean the Gowrie Family have become more than familiar with a hospital children’s ward.

The Starlight Unit, a satellite ward of Royal Manchester Children’s Hospital, based on the Wythenshawe Hospital site, almost became second home to Sammy and Matt Gowrie when their son Harry suffered a number of life-threatening conditions including sepsis and whooping cough.

Their daughter Nancy has also been treated at the Starlight Unit and together the children have had five serious stays in hospital.

The family were so touched by the care their two children received, they’ve been raising money for Royal Manchester Children’s Hospital Charity – most recently when Matt ran the Manchester Marathon.

“It’s got to the point where a few staff know us well and I can certainly recognise their faces,” said dad Matt, who works as a milkman.

“We’ve always been treated really well as a family – we can’t say a bad word about them, they’ve been wonderful.

“The staff have been totally amazing and we wouldn’t have our little family today without all the care and support they gave us. ”

The family’s first experience of the Starlight Unit was when Harry was just five weeks old in October 2012, when he developed whooping cough. Although relatively risk-free in adults, whooping cough (pertussis) can cause many complications in babies include breathing difficulties, fits and even brain damage.

He was then back five months later in March 2013 when he suffered from gastroenteritis, in June 2015 when he had suspected appendicitis and then in December 2017 when he suffered from sepsis. Sepsis can be very serious if not treated quickly and in some cases can lead to multiple organ failure and even death.

But despite the risks he faced, Harry is now doing well and his parents make light of the difficult time in his life.

“Harry never gets sick, but when he gets it, he gets it bad,” said dad Matt. “He doesn’t get a cold like other children – he gets sepsis and whooping cough. He never does things by halves.”

Mum Sammy added: “He has seen photos from when he was a baby in hospital with whooping cough and actually recognised one of the nurses when he had sepsis. He said ‘that’s the lady from the picture of me when I had a bad cough’.”

In January 2017 the family, who live in Timperley, Altrincham, welcomed little Nancy into the world. She too has had her fair share of stays in hospital, first for a bad viral infection when she was four days old, and then again in April last year when she suffered from hand, foot and mouth, slapped cheek syndrome (also called fifth disease) and bronchiolitis.

Sammy said: “The hospital stays were obviously very worrying, but they became even harder when Nancy came along. I’d be at the hospital with Harry and went home to see Nancy when Matt came to hospital to see Harry. We made sure one of us was always with each child, but it was exhausting.

“The hardest time was when Harry was in hospital at Christmas time last year. It was a big strain on us all. I don’t like to think what could have happened.

“But Harry being in hospital so much actually reassured him when his baby sister became poorly. He knew the doctors and nurses would look after her because they did the same for him.”

Their experience has inspired the family to fundraise for the Royal Manchester Children’s Hospital Charity. Earlier this month, Matt took part in the Manchester Marathon and raised more than £500 for the Starlight Unit. He completed the run in 3hrs 48minutes. Nancy and Harry were there with homemade signs saying “Go Daddy Go” to encourage him on.

“But you don’t have to do something as strenuous as a marathon if you want to get involved. We have lots of fundraising events throughout the year and encourage people to click on our events page to see what they can get involved in.

“We have our popular Humphrey’s Heroes abseil coming up in June. Visit our Humphrey's Heroes Abseil Page to sign up now.” 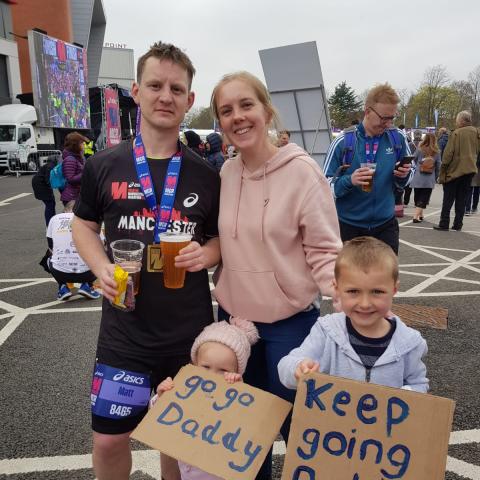