Stuart Holroyd from Bury has set himself a challenge for 2017, having signed up to take on this year’s Great Manchester Run to raise vital funds for the hospital ward he works on.

Stuart has been a nurse on Ward 84, the regional centre for the treatment of childhood cancer, at Royal Manchester Children’s Hospital for the past eight years. Caring for some of the hospital’s poorliest patients, Stuart knows better than anyone just how important fundraising is to the hospital, and how it can make a real difference to the patients treated there.

Stuart is one of the stars of Royal Manchester Children’s Hospital’s new fundraising campaign for the Great Manchester Run which is encouraging people of the North West to be a superhero for the hospital’s poorly patients by signing up to the run. On Sunday 28th May Stuart will be joining over 40,000 other runners taking part in the gruelling 10km race through the streets of Manchester at Europe's biggest running event.

Stuart comments: “Every single day I’m in awe of the incredible fighting spirit that our young patients show when diagnosed with cancer. Their bravery is just on another level and that’s why I want to show my support by taking part in this run. I’ve decided it’s my turn to be a superhero for the patients, helping to raise money that will make a big difference to the ward.

“People often ask me what it is like to work on a Children’s Cancer ward, as they think it must be such a tough and challenging job, but I always tell them that the ward is actually one of the happiest places in the hospital. Yes, the children are extremely ill but the staff and families on the ward are dedicated to making the ward as happy, positive and fun place as possible. Charitable funds play an important part in making the wards as warm, welcoming and comfortable for our poorly patients.

“I’m not a runner by any stretch of the imagination, so this will definitely be a challenge for me, but knowing I’m running for such a good cause will spur me on. My aim is to try and raise as much money as possible for the Ward and to make my patients proud!”

Lucy Naylor, Events Manager at Royal Manchester Children’s Hospital Charity comments: “We’re delighted that Stuart is not only taking on the Great Manchester Run, but is also fronting our new fundraising campaign for the event! The campaign aims to encourage people of the North West to assemble their team of everyday heroes for the Great Manchester Run and raise money for our poorly patients. Through raising vital funds our supporters will be helping to save lives – it’s as simple as that. Last year we were lucky to have a record number of runners taking to the streets of Manchester and we want to continue our success this year, so if you’d like to join our superhero runners, like Stuart, then we’d love to hear from you!”

If you would like to take part in the Great Manchester Run the charity have free, guaranteed entry places available. To apply for one of these places and for more information please click here 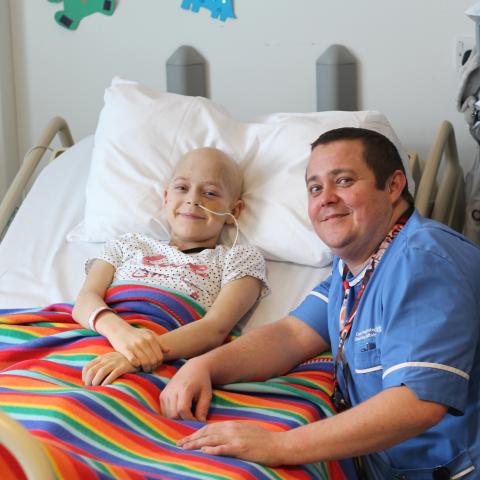