TK Components, based in Denton, alongside Bodycheck Glossop, were selected as champions of the fundraising campaign which asked local businesses to raise a minimum of £1,000 in the most innovative way possible. As part of the prize, Theo was invited to tour their premises of TK Components who are leading trade suppliers within the luxury kitchen and bedroom industry.

The Many Hands finale saw five shortlisted companies pitching to a panel of judges. The winning company showed the most initiative in developing an exciting fundraising concept; in this case it was ‘children helping children’. The campaign, spearheaded for the third time by retail entrepreneur Theo raised £52,000 during the last financial year.

The team actually consisted of the children of owners from both companies, something never seen before at a Many Hands Campaign. The five young girls, Adarna, Damara and Santia Hazelhurst alongside their friends Sophie and Lucy Campbell, persuaded their parents to let them organise a fun-run alongside a wide range of other fundraising ventures.

While at the business Theo chatted to Commercial Director, Chris Hazelhurst, about the management’s recent buyout of TK Components whilst touring the facility.  Theo also chatted to the girls about their plans for the future and if they are hoping to follow their father into the business!

“I’m delighted that I was able to visit TK Components to congratulate them again on winning Many Hands 2015. It was particularly enjoyable being able to visit such a successful and growing company only a stone’s throw away from where I grew up.

Despite their young ages, the winners demonstrated great passion and drive in exceeding the fundraising target. I wish them all the very best for the future and I am sure they will make fine businesswomen.”

“It was fantastic welcoming Theo to TKC –his vast business expertise and great personality made for a great day, we really enjoyed catching up with Theo again after the girls won the Many Hands Campaign. Theo toured the business and met some of our fantastic members of staff; it was great to share the day with them also.

I had time to discuss at length the exciting developments at TKC and Theo had great words of encouragement as we embark in the next chapter of our business’ future.”

The Many Hands Campaign, which was first launched in 2008, encourages North-West businesses to support the charity by signing up to a fundraising target of £1,000 each over. This year’s campaign launches on 22nd March with the first networking event being held at King Street Townhouse.

For 2016, the charity is creating a shorter campaign which will see Many Hands consolidated into the first financial quarter of the year. Over 160 companies have taken part in the Many Hands Campaign so far, and over £180,000 has been raised for the hospital.

To find out more about this year's Many Hands Event and to register click here. 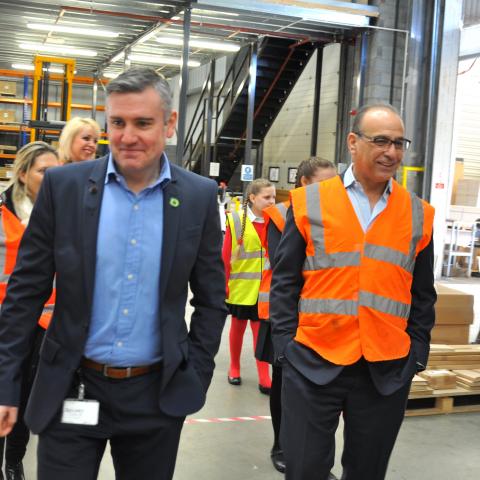