Central Manchester University Hospitals NHS Foundation Trust (CMFT Charity) has received its second instalment of £250,000, from the HELP Appeal’s £1,000,000 pledge, for its state-of-the-art new helipad, ahead of work set to begin this September.

The HELP Appeal, the only charity in the UK to fund vital infrastructure for hospital helipads, has now donated half of the cost of this new 24-hour primary helicopter landing site - serving the Hospital Trust’s one million patients from across the North West.

Work is now underway on the new helipad, with the site expected to be fully operational by Spring2018.

Robert Bertram, Chief Executive of the HELP Appeal, said: “It is a pleasure to gift Central Manchester University Hospitals with its second instalment of £250,000 for its new lifesaving helipad. We look forward to handing over the final two cheques of our £1million pledge in the near future and to seeing the helipad operational next year.”

Sarah Naismith, Head of Charities at CMFT Charity, said: “It is this generous funding from the HELP Appeal that will provide patients with life-saving access to our specialist hospitals and trauma teams. The helipad will serve all three of our central based hospitals and will ensure patients in critical need receive the emergency and specialist treatment required. Without donations like this we would not be able to implement and begin work on a project like this so quickly.”

The first 60 minutes following a major trauma injury are vital. Known as the ‘Golden Hour’, if a trauma patient receives medical attention in these 60 minutes their chances of survival increase significantly. Helicopter helipads reduce transfer time and ensure critical patients receive the immediate and specialist medical attention they need.

Since 2009 the HELP Appeal has identified and helped to fund state of the art helipads or upgrade existing infrastructure at 36 Major Trauma Centres and A&E hospitals across the UK. The HELP Appeal works directly with each hospital to drive the project, providing substantial grants assistance throughout the project including feasibility studies right through to launch. 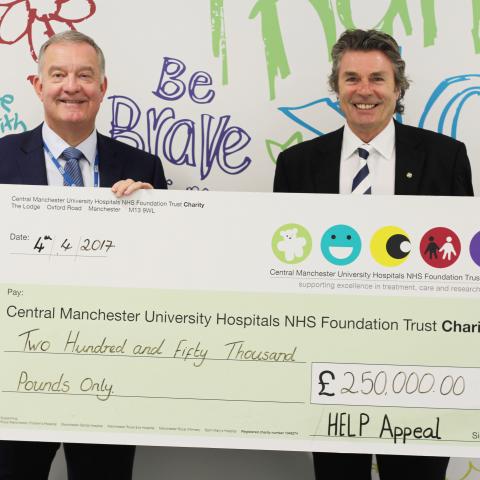