The parents of a young boy who was diagnosed with a life-threating, rare disorder have raised an incredible £15,500 for the hospital where he was treated.

Daniel Henderson, 2, from Dumfries was just 7 months old when he was diagnosed with Congenital hyperinsulinism, a rare disorder which causes dangerously low blood sugars and can have very profound effects on child development.

Daniel was admitted to Dumfries Royal Infirmary after suffering a brain seizure whilst at Nursery, but after they struggled to stabilise his blood sugar levels he was then transferred to Royal Manchester Children’s Hospital. Daniel’s blood sugar levels should have been above 4 mmol/l but was just 1.3 mmol/l at its lowest. Daniel is now under the care of NORCHI (Northern Congenital Hyperinsulinism Service) which is part of Royal Manchester Children's Hospital, and is currently taking medication, as his condition is so rare they cannot be sure of the need for medication in the long-term.

To raise funds towards training and research for this rare disorder, Daniel’s parents Emma and Gary organised The Norchi Charity Dinner Dance which took place on Saturday 19th March at Easterbrook Hall. The event was a huge success with 346 guests attending, lots of whom donned kilts, including little Daniel! The night featured a live band, auction and raffle with prizes including signed shirts and a golf day at an exclusive club.

“I really can’t thank the staff at NORCHI enough for everything they have done for Daniel. Finding out your little boy is seriously ill, and not knowing the reason why is every parent’s worst nightmare.

We were determined to help raise funds for NORCHI, to go towards research and training for this rare illness. We are so grateful to the specialist team for the care they have given Daniel, and want to give something back to help them continue their excellence in treatment and research.”

NORCHI became a nationally designated centre in 2006 and treats children from Birmingham to Scotland, with over 160 active patients with the condition. NORCHI is a European centre of excellence and provides the most up to date diagnostic facilities and the best treatment currently available for children in the north of the UK.

“We are incredibly thankful to the Henderson family for their fundraising, they should be so proud to have raised such a fantastic figure for NORCHI. This money will really help the centre to continue its advanced research and to deliver important training across the region and beyond. NORCHI works hard to look after poorly children when they need it most and I’m so pleased that Emma and Gary have put so much effort in raising funds for such a worthwhile cause.” 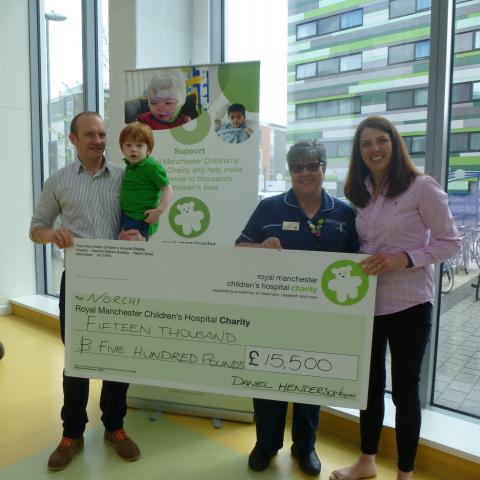