HE MAY play the butler’s father in the new upcoming TV series, but Ian Puleston-Davies will be channelling the likes of Batman when he descends a 19-storey building.

Ian will be starring in Pennyworth, playing the superhero’s butler’s father in the new TV series airing in July, but he’ll be more akin to Bruce Wayne himself when he joins Humphrey’s Heroes Abseil later this month.

To celebrate signing up, actor Ian visited the rooftop of the hotel off Oxford Road with charity mascot Humphrey, to see just how high the building is.

Ian, who formerly played Owen Armstrong in Manchester-based soap Coronation Street, said: “It’s going to be a fantastic day and loads of fun.

“I can’t wait to take part – the views from the rooftop are just incredible.

“It will be an exciting day, but it’s also for such an amazing and worthy cause. This month the hospital is celebrating its 10th birthday at the Oxford Road site so it’s extra special being involved in the abseil this year.

“Come and join me and let’s get scared together!”

The abseils, which are sponsored by Peninsula, will take place on Saturday and Sunday, 29th and 30th June. Places are starting to fill up, so anyone wishing to take part is encouraged to sign up as soon as possible. Superhero costumes are optional, but encouraged.

Registration is £30 and the charity has asked that participants raise a minimum sponsorship of £150 to help ensure Royal Manchester Children’s Hospital isn’t just the largest children’s hospital in the UK, but it’s also the very best. Every participant will receive something special for taking part and there will be a prize for the best-dressed superhero from the weekend.

And if being a superhero appeals, there is now an Ultimate Thrill-seeker Package daredevils can take advantage of. Fundraisers can sign up for Humphrey’s Heroes Abseil, a Skydive in September and Glow in the Park in October for just £50. (Minimum sponsorships and conditions apply). So you can scale heights, take flight and get bright!

Royal Manchester Children’s Hospital Charity’s Events Manager, Viv Williamson, said: “The abseil is a really fun family event that everyone can enjoy – kids can cheer from the bottom while the older ones descend 19 storeys.

“I can’t wait to see the costumes people come in. We’ve had some really elaborate costumes in the past and as long as you can move in them and descend safely, there is no limit.

“Our new Ultimate Thrill-seeker Package is an exciting offer for this year too – you can scale heights, take flight AND get bright to raise money for a good cause.”

Sign up to Humphrey’s Heroes Abseil or to take advantage of the Ultimate Thrill-seeker Package email lisa.talbot@mft.nhs.uk 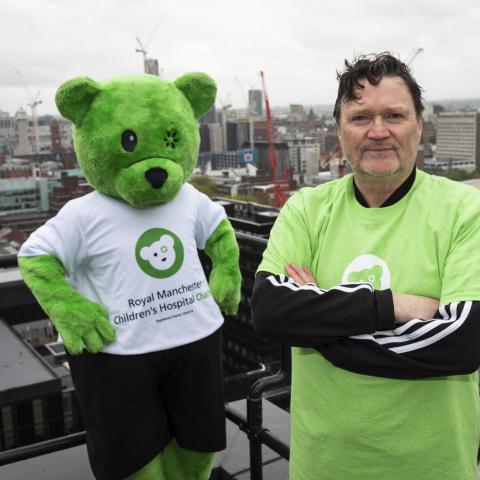