The visit tied in with Christmas Jumper Day (Friday 13th December) and also a visit of reindeer in the hospital’s atrium.

Simon, a father to three young boys himself, said: “We came to bring some festive cheer and give out some presents for Christmas and brighten their day a little bit. And I think it worked – we got quite a lot of smiles.

“It was very rewarding and I hoped it cheered them up a little bit.”

For their visit to Ward 75, Antony and Jennie teamed up together and families loved meeting the Corrie stars and chatting to them about their stay in hospital.

Antony said: “It’s been so lovely, we had such a nice time: the parents, the kids….it’s just been so beautiful.

“It’s been a wonderful experience. We’ve met some lovely children and it’s been gorgeous.

Jennie added: “Being in hospital over Christmas…it feels like it should be rubbish. But actually the staff are so good and everyone has Christmas deely boppers on and they make Christmas really special for these kids.”

Chris Bisson, who stars in Emmerdale, also visited Royal Manchester Children’s Hospital’s satellite ward, the Starlight Unit, which is based at the Wythenshawe Hospital site. His visit was on Monday and he delighted in giving out presents to children and chatting to parents about his character, Jai Sharma.

All the celebrity visits were organised by Royal Manchester Children’s Hospital Charity. The Charity’s director, Sarah Naismith, said: “Our incredible patrons are so supportive throughout the year but these Christmas visits are an extra special event for them.

“We were so pleased that so many of the celebrities were able to take time out of their busy schedules to meet the children and families on the wards.

“It means the world to the children and the staff and we can’t thank them enough for all their support at this time and throughout the year.”

Photographs from all the visits are displayed in our photo gallery. 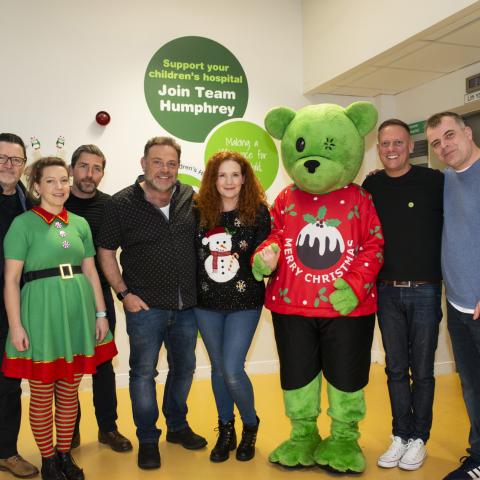