Three-year-old Freya Rothwell, from Bury, will be taking part in a 4km sponsored walk with her siblings to say thank you to Royal Manchester Children’s Hospital for her life-saving treatment.

In August last year, when Freya was just 22-months-old, she started having daily seizures causing the left-hand side of her body to twitch compulsively. Her concerned mum, Wendy, took Freya to her local hospital to find out what could be wrong with her little girl.

Wendy said: “I was incredibly distressed when Freya started choking and had her first seizure. She’d never had anything like that before, so I was totally shocked and worried for my little girl. At our local hospital Freya underwent an electroencephalogram (EEG) which revealed an abnormality on the right-hand side of her brain, with doctors believing Freya had epilepsy so she was put on a course of medication.”

The seizures continued daily for Freya and in October she was referred to Royal Manchester Children’s Hospital for an MRI scan. The scan revealed the devastating news that Freya had a brain tumour, the size of a grape, located in her frontal lobe.

Wendy said: “Receiving Freya’s diagnosis turned my whole world upside down. I was in actual shock and just couldn’t believe what I was hearing. Learning that your little girl has a brain tumour is something no parent should have to go through. Freya underwent more tests at the hospital which thankfully revealed that the tumour was benign, which was such a relief, as I couldn’t help but think the worst at that point.”

Wendy said: “Freya’s surgery was on the Tuesday and by the Friday she was like a different person. She was back to her old-self; happy, well and no more seizures. I couldn’t be more relieved and owe everything to the hospital. Freya now has MRI scans every three months at the hospital and so far, is doing really well.”

Now to say thank you for the care she received, Freya and her siblings will be taking part in Royal Manchester Children’s Hospital Charity’s Lantern Walk on 17th November.

Wendy added: “The care and treatment Freya has received at the hospital has been absolutely amazing. I can’t thank everyone enough for all they have done. Taking part in the walk is our way of giving something back to the hospital. We recently learnt of the hospital’s iMRI Scanner Appeal, to build a new intra-operative MRI (iMRI) scanning suite at the hospital which will help other children like Freya who have brain tumours. That’s what we are fundraising for at the walk, to help other children like Freya.”

Angela Rowe, Community Fundraising Manager at Royal Manchester Children’s Hospital Charity commented: “We are delighted that Freya is doing so well after her surgery and can’t wait to welcome her to our Lantern Walk at Heaton Park. It’s going to be a fantastic afternoon and we hope that families from across the North West will join us to take on the sponsored walk and raise vital funds towards our iMRI Scanner Appeal to make a difference to many children, like Freya, in our hospital.” 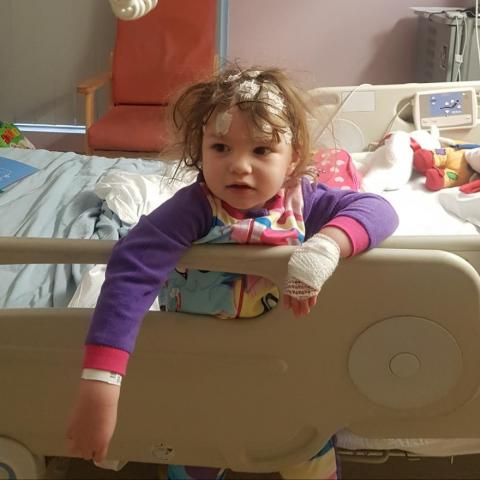