Long-term patient of Royal Manchester Children’s Hospital, Brooke Taylor, has launched a fundraising campaign with a difference, one which she would have much rather started under very different circumstances.

In July 2014 14 year old Brooke from Bolton underwent major surgery at the hospital to straighten her spine. The condition, known as Congenital Spondylolisthesis, is a birth defect which means the spine slips out of place, titanium screws and rods then have to be inserted to hold the spine in place.

To ensure the operation is as successful as possible, Brooke has been imposed with a ban on all sports and physical activity until after the bone graft has fused - something which has taken much longer than initially anticipated. To further complicate Brooke’s current condition, in March the metalwork in Brooke’s back fractured meaning the bolts had to be replaced, further slowing down the healing process.

To say missing out on all physical activity has been a challenge for the teenager is an understatement, prior to her surgery Brooke was incredibly sporty and now feels as though she is ‘forbidden’ from doing what she loves the most. It is this ban from sports which has inspired her ‘Forbidden Mile’.

The ‘Forbidden Mile’ asks those who are able to, to take on a one mile challenge. Be that running or cycling to the more extreme, skateboarding or walking backwards, all that Brooke asks is that the mile is dedicated to her and others in similar situations.

On completing a ‘Forbidden Mile’ participants are asked to nominate three more people to ensure hundreds of miles are completed whilst donating £2. All funds raised from the activity will be split between Brooke’s two chosen charities, Royal Manchester Children’s Hospital Charity and the Diversions Family Support Network.

So far there have been a wide variety of exciting ‘Forbidden Miles’ taking place as the people of Bolton, and beyond, have got behind determined Brooke. Over 40 members of Farnworth Weightwatchers and friends completed a one mile walk whilst one participant even completed it backwards in wellies!

CrossFit Wigan's Sharon Atherton along with Traci Robbins did their bit for Forbidden Mile by walking one mile dragging a sled, each weighing in at 25kg. However, a favourite mile of the Taylor family so far is the ‘wrong way around Ikea mile’!

Brooke has been treated at Royal Manchester Children’s Hospital since birth and the sporty family are regular fundraisers for the charity having completed an impressive 16 runs for the hospital over the years. In the words of Brooke’s mum, her daughter has undergone more operations than birthdays due to also being born with a rare pelvic tumour.

“We all take things for granted at times and it’s not until something you love is 'forbidden' that you start to look at things differently. Please don't ever take things for granted. 'I can't be bothered' is not an option. If you have the ability to do it then do it! Some people would do anything to be in a position to complete one mile right now. I hope people enjoy the challenge whilst raising money for two very important charities.”

“We are fully behind Brooke’s latest fundraising initiative, it is a wonderful idea! Brooke has been a patient of the hospital for many years and we all know how much sport means to her and her family. No matter what is thrown at Brooke she remains determined, despite her recent bad news she has channelled her energy into thinking up a really inspired way to raise awareness, and funds, for her chosen charities. We encourage anyone who can to get involved!”

All funds raised by Brooke for Royal Manchester Children’s Hospital will go towards their new appeal to build a helipad on the hospital site. Currently, air-lifted patients must land on parkland over one mile away from the hospital. The Helipad Appeal will enable the creation of a brand-new 24-hour access primary helicopter landing site, the first in central Manchester, allowing the hospital to save many more lives and increase the chances of a full or improved level of recovery for many seriously ill or injured patients.

To find out more join the Forbidden Mile Facebook group. 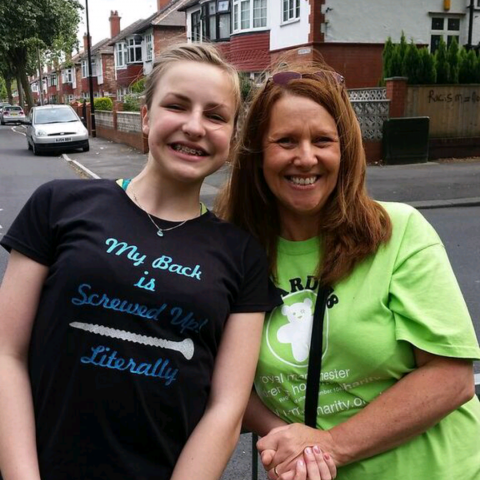