Brave youngsters from Royal Manchester Children’s Hospital were welcomed as honorary team members for the day, as they got the chance to join Manchester City’s men’s and women’s teams for their annual squad photo shoot.

Upon their arrival at City Football Academy, the City mad youngsters aged six to eleven, were each presented with a brand-new 2018/19 home kit and a range of goodies in preparation for meeting their footballing heroes.

As the players arrived for their shoots, the groups were able to get their shirts signed, and two patients even had the chance to have a kick around with some of the women’s team.

Sitting on the front row alongside First Team Manager, Pep Guardiola and the Club’s record goal scorer, Sergio Aguero was a dream come true for Blake, George, Charlie and Thomas, who are all receiving on-going treatment at the hospital for a range of illnesses.

City left-back, Benjamin Mendy, welcomed the boys as if they were his official teammates, making lots of jokes and funny faces during the photograph.

Talking about his experience, Blake, a patient at Royal Manchester Children’s Hospital, said:

“When I was told that I’d be part of the official team photo I was so excited! To meet Leroy Sane and the rest of the team was a fantastic experience. I had such a great day, thank you!”

“We’d like to extend a big thank you to Manchester City for inviting some of our patients to be a part of their official team photo. The children absolutely loved being welcomed by all the players and had an unforgettable day, giving them memories they will treasure forever.”

The club are always thinking of our patients and different ways to give them a treat whilst going through difficulties at hospital. We are extremely grateful for all the support they’ve showed us over the years.”

After the photograph, the youngsters were surprised with tickets for Manchester City’s next Premier League home fixture, which for some would be their first time seeing the team in action at the Etihad Stadium.

The experience forms part of the Club’s long-standing relationship with the hospital. Earlier this season, patients joined the squad on their champions parade through Manchester city centre and the Premier League Trophy and Carabao Cup also made a special visit to the children’s wards with Club mascots, Moonbeam and Moonchester.

Royal Manchester Children’s Hospital Charity will be conducting a bucket collection at the Etihad Stadium on Saturday 20 October 2018. If you would like to volunteer at the collection, you can find out more information here. 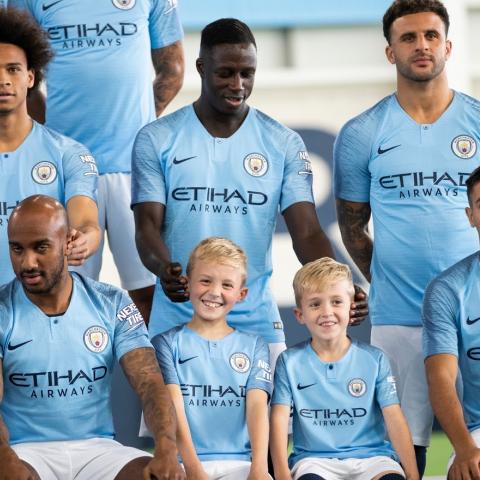