Brave Henri to Take Mini Manchester Run in His Stride

On Sunday 28th May Henri will be a special guest race starter for the mini wave of the Mini Great Manchester Run which will be a huge achievement for Henri after a shock diagnosis left him fighting for his life.

In February 2015 a bout of tonsillitis and a fever resulted in Henri being transferred to the Paediatric Intensive Care Unit (PICU) at Royal Manchester Children’s Hospital. Henri’s mum, Kayleigh had been concerned when Henri became limp and less reactive to things going on around him, so took him to their local hospital for a check-up.

Kayleigh comments “The hospital thought it was just a virus, so sent us home. The next morning Henri had lost the ability to walk and talk or even move his left-side; he was deteriorating so quickly that he was immediately transferred to PICU at Royal Manchester Children’s Hospital. I had no idea what was wrong with Henri and was completely devastated at how ill my little boy was, but I was comforted in knowing he was in the best hands possible.”

Henri underwent blood tests, a CT scan and a MRI scan and was on drips and feeding tubes, thankfully after five days on PICU he stabilised and was transferred to a ward. Following the tests Henri was diagnosed with a rare inflammation of the brain and spinal cord known as Acute Disseminated Encephalomyelitis (ADEM).  This meant that instead of Henri’s body fighting the tonsillitis and the cough it was attacking itself, affecting the central nervous system and injuring the brain.

Kayleigh adds: “The doctors told us that Henri had a long road to recovery but I knew one thing; we’d stick together as a family and we would never give up.  To help get his movement back Henri started intensive physiotherapy.  After spending 18 long days in hospital we were delighted to be given the news that Henri could go home and he would continue to receive physio within the community setting.

“Henri may never fully recover from the ADEM and he is still under the care of the neurology team at the hospital. The processing part of Henri’s brain has been affected which makes it extremely difficult for him to retain information.

“We’re over the moon that Henri is walking and talking again although he does become tired easily, but I thank my lucky stars that he is still able to do the things that he enjoys. The nurses were inspirational and true Angels, I find it difficult to visualise what could have been reality should Henri not have received the care he did.  Henri is determined to try and run the Mini Great Manchester Run and he’ll have his sister Elsie by his side for support, but I know with his strength and determination he will try his best to cross that finish line.”

The Mini Run is for children aged 3-8 and parents may accompany Mini runners. The Junior event is for children aged 9-15. The charity has a limited number of places in the run up for grabs for a discounted price of £5. To register please visit: http://www.rmchcharity.org.uk/events/junior-mini-great-manchester-run 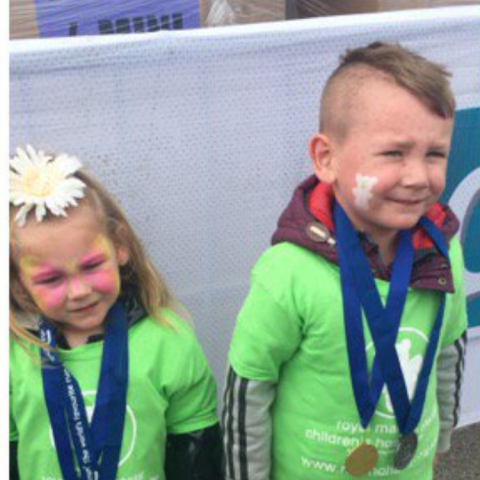