Five year old Charlie Whalley is leading the way for his family to raise money for Royal Manchester Children’s Hospital Charity, which saved his life after he suffered 10% burns when he was just fifteen months old.

Charlie and his brother Oliver (9) will be the special guest starters at the Junior and Mini Great Manchester Run taking place on Saturday 17th May in Heaton Park.  Charlie will be taking part in the Mini Run and Oliver will be putting his best foot forward in the Junior event.

The weekend will be a family affair will big brother Daniel (16) and parents Michelle and Andy battling it out in Europe’s biggest 10K, the Great Manchester Run on Sunday 18th May.

Charlie was rushed to RMCH for treatment after pulling a boiling pan of hot water from the kitchen hob over himself in 2010, seriously scalding his whole right arm and a quarter of his torso.

Royal Manchester Children’s Hospital Charity are Manchester City Council’s nominated Charity for this year’s run and the family want to encourage as many people as possible to sign up to the adult and junior events to support RMCH Charity.

All fundraising from this year’s Junior & Mini Great Manchester Run will support a very special project to help children who have suffered burns injuries.  Burns Camp is a residential camp for children aged five to sixteen.  The camp is designed to help children, not only with the physical effects of a burn injury, but also the emotional and social aspect of living with an injury that may make them look different.

Camp activities are designed to help enhance self-esteem and improve body image for children with burn injuries. The camp helps to empower children by sharing experiences with others who have been through something similar, this can help to build success in many other areas of their life including home and school.

“We will always be grateful to Royal Manchester Children’s Hospital for the care they gave Charlie.  Taking part in the Great Manchester Run weekend is our way of saying thank you.

Charlie is really excited about being the official race starter for the Junior and Mini Great Manchester Run.  The whole family have had a lot of fun training for the events.”

“We cannot thank the Whalley family enough for coming together and taking part in these events for us. This year we want to see as many people as possible crossing the finish line at all three runs wearing Royal Manchester Children’s Hospital Charity green t-shirts.

It’s not too late to join Team Humphrey, don your green shirt and support RMCH Charity at the Junior & Mini Great Manchester Run.  People can still sign up at www.greatrun.org and tick to run for us.” 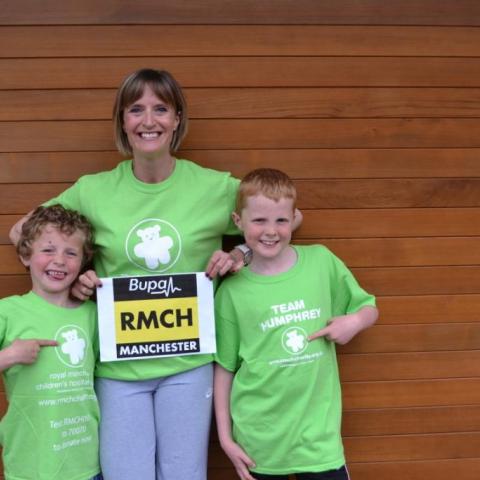