Ten-year-old-Ben Greenwood from Oldham has signed up for this year’s Junior Great Manchester Run, even though he suffers with multiple allergies, daily pain fatigue and has what he calls ‘rusty’ joints.

When Ben was just ten-days-old he fell ill and stopped gaining weight and growing. His mum, Andrea, was alarmed when Ben was losing weight at quite a fast rate. After undergoing tests it was discovered that he has bone age delay which means that his bone age is younger than his calendar years.

Ben is under the allergy and immunotherapy team as he suffers with food and environmental allergies, hay fever and asthma. He is one year into a three year immunotherapy treatment where he takes a tablet each day to retrain his immune system.

Ben’s mum Andrea comments: “We have to be really careful with Ben’s allergies, so with the help of a special medical dietician we’ve been guided in the best way to get more calories into Ben’s meals and what food to avoid that trigger his allergic reactions. Hopefully Ben will eventually catch up in height, but there’s no guarantees so he’s smaller in height than his classmates.”

Most recently Ben has been diagnosed with hypermobility syndrome, which means simple tasks such as tying a shoelace or getting out of bed can be painful and can make the task take longer. To help with his pain and joints seizing up, Ben undertakes daily physio and is currently working on his pacing to enable him to manage everyday tasks better and to try and prevent pain fatigue kicking in.

Andrea comments: “Ben suffers daily with pain fatigue, so some of the things that most young children take for granted, like playing in the park, will tire him easily and he will need support as his joints can seize up. Ben refers to this as his joints feeling “rusty”. He undertakes a home Physio plan each day that we’ve been taught by the team at the hospital. Ben also wears orthotics to support his walking and balance.”

To say thank you to the hospital Ben has signed up for the Junior Manchester Run. This is his third year doing the run, and will be dressing up as a superhero to give him extra ‘power’ on the day to get through the race.

Ben’s mum Andrea adds: “Ben is determined to support the hospital as to him, it’s a very special place. The hospital helps every child that walks through its doors in some way, so this is Ben’s way of giving a little back. No parent wants their child to be in hospital; however Ben has frequent appointments which have now become part of his everyday life. By taking part it shows him that he can achieve anything.

“The run is 2.5k which might not seem far, but for Ben it will be a big challenge. One of Ben’s lovely qualities is that it’s never about being the winner or being the best; it’s about taking part, having fun and trying your best. But he will always be a winner in our eyes.

“We are extremely lucky to have Royal Manchester Children’s Hospital on our doorstep; I’m not sure what we would have done without it! Ben is treated by a large team and each consultant we see ensures Ben has every opportunity to improve his quality of life. For this we will forever be grateful.”

Jessica Ruth, Events Manager at Royal Manchester Children’s Hospital Charity comments: “We never fail to be inspired by the patients at our Children’s Hospital, and Ben is no exception. This run won’t be an easy task for Ben, which shows just how remarkable he is! Although he’s been through so much he wants to challenge himself further to help other poorly children at the hospital. We will be there on the day to cheer along Ben and our other young runners.”

You can sponsor Ben in his challenge here: www.justgiving.com/fundraising/andrea-greenwood4 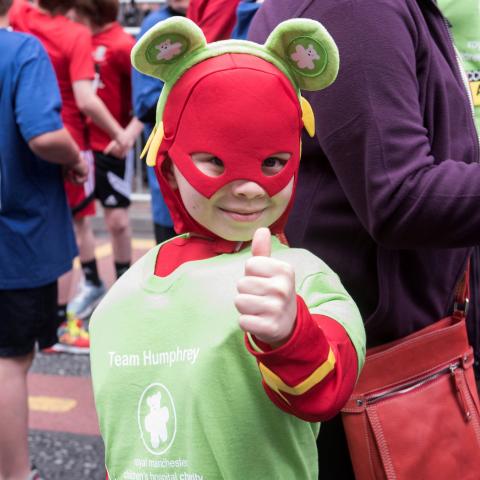