A YOUNG boy’s harrowing barbecue accident which left him temporarily unable to walk and in need of a skin graft has inspired a fundraising campaign.

Will Tyler, who was just nine years old at the time, stepped on hot sand where a beach barbecue had previously been sat – severely scarring both his feet and leaving him needing urgent medical treatment. His dad had to run across sand dunes, carrying him for 20 minutes in summer heat, to get back to the car so his mum could drive him to hospital. The surgery and care Will received at Royal Manchester Children’s Hospital inspired him to start fundraising for the hospital’s charity.

On the one-year anniversary of his accident, 1st June 2021, Will began his eight fundraising challenges, which vary from an 8km walk to eight random acts of kindness. Yesterday (1st June) he revisited Formby Beach where his accident happened, to raise awareness of the dangers of barbecues on sand. All the money he raises will go to Royal Manchester Children’s Hospital Charity and will help other young burns patients just like Will.

“I wanted to do some fundraising themed around the number eight because that’s how many nights I was in the children’s hospital,” said Will, now aged 10, who is still attending appointments with the hospital.

“It was really difficult because it was last year during lockdown so my sister Lily and my dad weren’t able to visit me, I was only with my mum. But all the nurses were nice to me and everyone on the ward was really kind.

“It was hard because my injury was really painful but then the dressing changes were sometimes as painful as when I burnt myself. I also couldn’t walk for a while and I had to use a wheelchair and then crutches.”

Will, parents Toby and Claire, 44, sister Lily, now aged 12, and their friends the Morley family, had decided to leave their homes in The Heatons, Stockport to have a day at the beach when the accident happened. They had purposefully hiked across the sand dunes at Formby to keep away from the crowds and so were far away from their cars.

They set up a disposable barbecue to enjoy some sausage sandwiches, and then once the barbecue had cooled, moved it to one side, far away from the children, so the youngsters could run around and play.

“Everyone I’ve told this story to just cannot believe how sand can stay that hot,” explained Toby, aged 51. “We’d used one of those disposable barbecues where the coals are in a foil tray. The bottom of the tray was on the sand, which I now know meant the heat was being sent down into the sand and the foil surface was trapping it there.

“When we moved the barbecue, the top of the sand cooled in the atmosphere, but underneath it was still roasting hot as the heat had just been trapped there. We learned later it can stay dangerously hot for hours and hours.

“The kids were running around playing when suddenly Will just screamed. As a parent, it’s the worst sound I’d ever heard and it’s a sound I’ll never forget. He pulled his foot out of the sand and his skin was peeling off his foot like melted wax.

“We realised the sand was scalding hot and we were miles from anywhere with no first aid kit or anyone to help us. I ran carrying him to the car – by the time I got there I was soaking wet with sweat. I wasn’t sure I was going to make it but seeing Will’s foot….I guess the adrenalin just kicked in.”

Claire drove Will to a nearby hospital about 30 minutes away from the beach before he was taken to Royal Manchester Children’s Hospital. From there it was a slow recovery process, initially spending nine days and eight nights in hospital unable to have visitors other than his mum, and in a lot of pain.

“He had to have a skin graft from his right thigh to his left foot,” said Toby. “He was on morphine for the pain but I know there were some days, especially when they had to change his dressings, that were particularly bad for him. He was given morphine, gas and air to help get him through the pain for the dressing changes.

“Eventually he was well enough to weight-bear on his better foot and he could shuffle around on his bottom a little bit, which meant he had enough mobility to come home. Once you can get up and down stairs they’re happy you’ll be okay at home.”

Will’s recovery was far from over and he relied on a wheelchair at first – a frustration for the youngster who was used to running around and bouncing on his trampoline. From his wheelchair he progressed to a walking frame and crutches and eventually was able to walk unaided again. But he still has to look after his feet – wearing compression socks 23 hours a day and a splint at night, moisturising his skin and massaging the skin to reduce bumps in the scar tissue.

“He has fun with it – he calls it his ‘bacon’ because that’s what it looks like,” said Toby. “As he’s still growing we’re not sure if there will be operations in future. But for now he is recovering well and he’s lucky that he has some close friends that have been really great at supporting him. And of course we have to thank the team at the hospital’s Burns and Plastics Aftercare Clinic.

“He also took part in the hospital’s Burns Camp which he really loved. It’s a camp they have every summer, but this time it was virtual, and he thought it was amazing. Hopefully he’ll get to experience a real-life one this year.”

It’s the Burns Camp and his treatment at the hospital that inspired Will and the Tylers to fundraise for Royal Manchester Children’s Hospital Charity. Will has set himself an “8 Days in June Challenge”, with the money going towards Burns and Plastic Surgery Paediatric Services and the Burns Camp.

Will has even designed a special logo for his challenges. Incorporated in the logo is a beach scene and a fire to remind people of the dangers of barbecues on the sand.

All themed around the number eight, to represent the eight days he spent in hospital, Will will be taking part in the following….

In addition, the family and Toby’s school, Great Moor Community Infant School, where Toby is a teacher, will be taking part in Royal Manchester Children’s Hospital Charity’s Be Seen in Green…or Blue day. This event encourages people to dress in green for the hospital, blue for the NHS or a mixture of the two and make a donation to the Charity.

Will said: “We originally wanted to raise £888 but even before the challenges were nailed down, we’d already smashed that target. So now we’re having a rethink of how much we would like to raise.

“As well as raising the money, I really want to raise awareness of how dangerous it is having a barbecue on the sand. We didn’t know how hot the sand would get, or that it would stay hot for such a long time.”

Community Fundraising Officer Jo Thomas from Royal Manchester Children’s Hospital Charity has been supporting the family with their fundraising. She said: “Will is such an inspiring young man and his enthusiasm for his fundraising is incredible.

“He really has thrown all his energy into preparing for his challenges and everyone at the Charity can’t wait to hear how they all go. I’m particularly looking forward to the head shave pictures!

“We want to thank Will and all his family and friends for not only fundraising a fantastic amount of money, but also raising awareness of such an important issue.”

To sponsor Will and learn more about his challenges visit his JustGiving Page. If you’d like your own school, college or workplace to take part in Be Seen in Green…or Blue day click here. 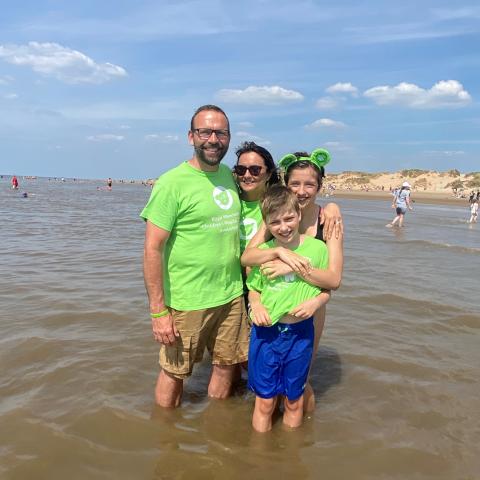