Eleven of ANS’ toughest challengers took part in the 12-mile mud and obstacle course which is designed to drag participants out of their comfort zone by testing their physical strength, stamina, and mental grit.

The events, which took place at Cholmondeley Castle on Saturday 9th September and Holmbush Farm on Saturday 23rd September, saw both our Manchester and London-based employees take on the challenge in which they raised an impressive £1,175.74 for ANS’ partner charity, Royal Manchester Children’s Hospital (RMCH).

“Last year my friend’s 3 years old daughter, Talya was been diagnosed with cancer. During the long months of Chemotherapy she spent most of her nights at Ward 84 at Royal Manchester Children’s Hospital. The staff on the ward were absolutely incredible and supported Talya and the extended family throughout the treatment. When I heard that ANS were taking part in Tough Mudder, I knew I had to get involved and I’m so glad I did - it felt great to be able to give something back to the hospital.”

Joel Oxberry, Corporate Fundraising Manager at Royal Manchester Children’s Hospital Charity comments: “ANS are one of our  key fundraising partners and we are delighted they decided to take part in Tough Mudder to raise money in support of our charity. The team did a brilliant job in raising this money, which will be allocated to Ward 84, the oncology and haematology ward at our Children’s Hospital. The funds will be used to provide additional resources on the ward to help make life that littler bit easier for the patients and their families who use the hospital.” 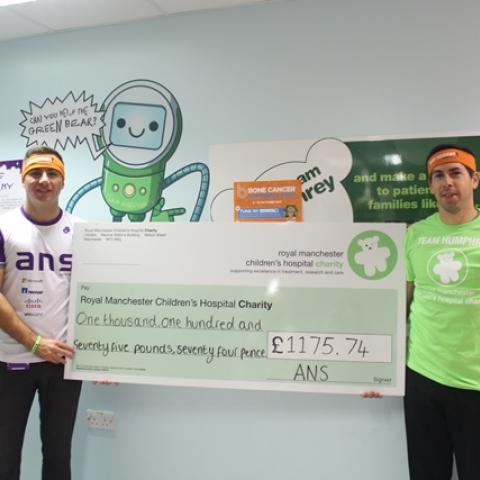