PARENTS of a young girl perform CPR on their daughter on an almost weekly basis to keep her alive.

Charlotte Drinkwater, known as Charlie, is just three-and-a-half years old but she has a list of complicated medical conditions and has already undergone 11 surgeries in her life.

The combination of symptoms she suffers means she often stops breathing. About once a week she’ll suffer a more serious attack and go into cardiac arrest. Her parents Becci Barrow and Andrew Drinkwater are always alert and ready to drop everything at a moment’s notice to perform life-saving CPR on their child.

But despite the trauma her little body goes through on a regular basis, Charlie is a cheeky, smiley young girl and loves nothing more than playing with mummy, daddy and her pet chinchilla Chilli at the family’s home in Darwen, Lancashire.

“She’ll go into respiratory or cardiac arrest and suddenly it’s all systems go,” said Becci. “When it’s respiratory we use what’s called an Ambu-bag to pump air into her lungs and bring her round. But when it’s a cardiac arrest it’s the full CPR with chest compressions. Mostly we can bring her round on our own, but we instinctively know now when it’s going to be a 999 call and we get the paramedics out.

“If she has a tantrum she often breath holds and because of the neurological makeup of her brain, her breathing instinct doesn’t kick in like it should, so she goes into respiratory arrest. These can happen a number of times a day but the CPR is probably once every week or two.

“When she comes around afterwards she bounces back quite quickly and back to normal. And you just think ‘how is she going through all that and then carrying on?’”

Charlie’s upbeat attitude and the support she has received from her medical teams are the inspiration behind the family’s fundraising for Royal Manchester Children’s Hospital Charity.

Charlie’s auntie Jessica Barrow, who lives in Somerset, has been doing whacky challenges – including a bath of food and a sponsored celebrity impressions day. Jessica has been doing her challenges for the last month and has raised more than £500 for the Charity in Charlie’s honour.

“Staff at Royal Manchester Children’s Hospital are like family to us,” said Becci. “Some of the wards feel like a second home and they all know Charlie when she’s in.”

When she was born on Valentine’s Day in February 2017, having been diagnosed with spina bifida while still in the womb, Charlie spent just four weeks in hospital before being discharged home. But sadly Charlie was back on the wards within a fortnight when she started to suffer from respiratory distress. She then spent a period of almost ten months in Royal Manchester Children’s Hospital and was home in time for Christmas 2017, before another long stay in March 2018.

“She has had 11 surgeries in total,” said Becci. “The conditions she has mainly affect her respiratory system but she’s had surgeries for a spinal closure, a brain decompression, three shunt revisions….it’s a long and complicated list.

“Her last surgery was in September and she ended up staying two months in Royal Manchester Children’s Hospital – it seems she doesn’t do short stays!”

Like many families with a poorly child, Becci and Andrew have battled a lot of stressful situations and near misses with Charlie. But to their family and friends they often make light of things and don’t like to worry them with too much detail.

Becci’s sister Jessica admits she didn’t fully appreciate the severity of one of Charlie’s cardiac arrests until she heard one for herself. Chatting on the phone earlier this year, Charlie went into an arrest and the severity of what was happening to her young niece hit home to Jessica.

Jessica said: “Becci makes light of it to protect us I think, but hearing Charlie collapse and being powerless to do anything when I’m more than 200 miles away just really hammered home to me how important the hospital is to Charlie.

“I went up to Royal Manchester Children’s Hospital before lockdown and I was able to surprise Charlie and Becci. Seeing the hospital for myself really emphasised to me all the wonderful work they do. That’s why I decided to do the fundraising.

“I was able to do so many challenges because I was furloughed. I’m now back at work but I still want to carry on doing what I can to hit my £750 target.”

Speaking of her sister’s amazing fundraising, Becci said: “We’re all very proud of her and know first hand that every penny donated to Royal Manchester Children’s Hospital Charity will go towards giving children like my daughter a chance not only to survive, but thrive and enjoy life to the fullest.”

Jessica’s fundraising has mostly been themed around the number 72, with donors encouraged to give £7.20 per activity. This was to tie in with the Charity’s #72for72NHS campaign, which Jessica is part of.

Royal Manchester Children’s Hospital Charity is part of a team of hospital charities under the umbrella name of Manchester Foundation Trust Charity which this summer is celebrating the NHS 72nd birthday. The Charity, which fundraises for hospitals across Manchester and Trafford, is hoping supporters will take on the #72for72NHS challenge by fundraising around the theme of the number 72. Participants can either choose to raise £72 or do a 72-themed challenge and the money they raise can go to the hospital or ward of their choice.

Laura English, Royal Manchester Children’s Hospital Charity’s Events Officer, said: “Charlie is such a brave little girl and an inspiration. We’re so pleased that Becci and Andrew find the hospital so welcoming and friendly.

“The fundraising Jessica is doing will support projects focused on ensuring patients like Charlie receive the highest quality treatment in the best possible facilities.”

Royal Manchester Children’s Hospital Charity fundraises throughout the year to support the treatment, research and care of young patients treated at the children’s hospital in Oxford Road, Manchester. The hospital sees more than 276,000 patients per year and takes in patients from across the North West and beyond.

To sign up to the #72for72NHS challenge and get inspiration for fundraising ideas visit our MFT Charity 72 Page. 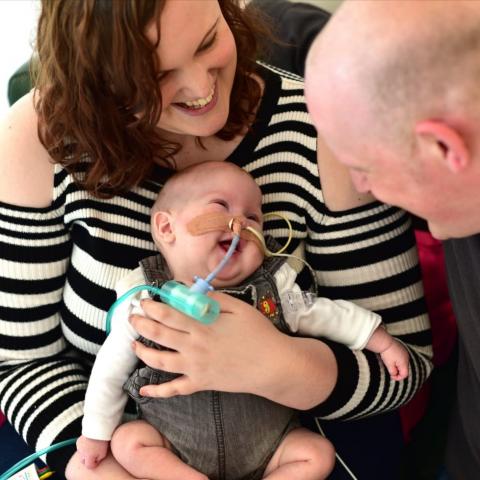