The Middleton school was taking part in Be Seen in Green day, a fundraising campaign sponsored by Ryman Stationery which asks participants at local schools and businesses to wear something green, the colour of the charity, in return for a small donation.

The school was picked at random from those participating to win the visit from the former Olympic and World Champion swimmer, who held a question and answer session with the children before posing for pictures with pupils alongside the Children’s Hospital mascot, Humphrey Bear.

Proudly showing off two of her medals won at the Beijing Olympics in 2008 and at last summer’s home Games in London, Becky shared some of the secrets of her incredible sporting success with the 400 plus pupils, as well as encouraging the youngsters to do what they can to support others less fortunate than themselves.

Commenting on her visit, Becky said:

“I thoroughly enjoyed my visit to Alkrington Primary – the kids were so enthusiastic and made me feel very welcome. I’m not sure if they were more pleased to see me or my medals but, either way, I hope they enjoyed the day!

“It was great to see the children’s reaction to the work that the charity does and to see how much they want to help support other poorly boys and girls in the area. Be Seen in Green is such an easy way to engage youngsters in charitable fundraising and I hope today’s experience will encourage them to keep supporting the Children’s Hospital in future.”

“We are extremely proud to have welcomed Becky to our school. She is a truly inspirational role model for young people and we very much hope that her visit will encourage our pupils to believe that, with hard work and self-belief, the sky is the limit for what you can achieve.

“We would like to extend our sincere thanks to Becky and to the Children’s Hospital charity for giving our pupils this opportunity and very much hope that the Be Seen in Green campaign is a great success.”

Also receiving a visit from Rebecca was the St Ann’s Square branch of HSBC. The Manchester city centre bank, comprising 50 staff, was picked at random for the visit from the dozens of businesses throughout the Greater Manchester region who signed up for this year’s campaign.

Funds raised by this year’s Be Seen in Green campaign are being donated to the hospital’s specialist burns unit, the largest of its kind in the country. Patients attending the burns unit have suffered from a wide range of thermal injuries which are extremely painful and can require years of treatment and aftercare.

The charity is hoping to raise £135,000 throughout the year to fund a project of therapeutic artwork, designed to reduce the clinical feel of the environment in which a patient is treated, thus providing a powerful distraction from their pain and distress, which lessens stress and can help to speed up a child’s recovery.

Be Seen in Green has been sponsored by leading specialist stationery and office supplies company Ryman since the campaign was first launched in 2011. Ryman Chairman Theo Paphitis, long-time star of BBC show Dragons’ Den, is a long-time supporter of the charity and said:

“I am pleased and proud to continue to support Royal Manchester Children’s Hospital Charity’s Be Seen in Green campaign. It is a wonderfully simple fundraising concept which has raised thousands of pounds for the charity over the past few years, demonstrating how just a small donation can help to make a big difference.” 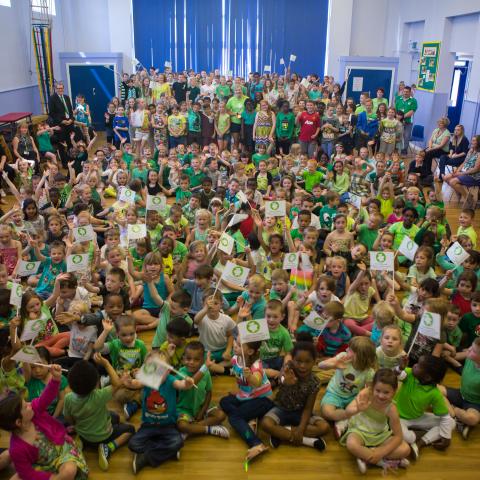