11-year-old Rijul Sudhir, who was the first patient to be admitted to Royal Manchester Children’s Hospital on its opening day in 2009, has returned to the hospital 10 years on as part of the birthday celebrations.

The festivities mark a decade since Booth Hall and Pendlebury children’s hospitals merged to create the world-class RMCH which first opened its doors in June 2009 on Oxford Road in Manchester.

Over the last 10 years, RMCH, part of Manchester University NHS Foundation Trust, has cared for more than 2.2million young patients and remains to be the largest children’s hospital of its kind in the UK.

On his return to the site this week, Rijul met with some of the original staff who treated him a decade ago, including Lead Nurse at RMCH, Walter Tann.

He was just 18-months-old when Rijul first visited the hospital during his recovery of a viral infection. As he was the first patient to arrive, he was given a special certificate and was greeted by delighted staff. Today, along with some of the original staff members they were reunited 10 years on.

Walter was previously Lead Nurse for Surgery at Booth Hall and was part of the huge team that planned the safe transfer of patients. He can still recall the opening day at RMCH, and the excitement of the arrival of new patients to the brand new facilities.

Speaking about the celebrations, he said: “The 10th birthday for the Royal Manchester Children’s Hospital is a real milestone and I am incredibly proud to have been part of the journey since Booth Hall and Pendlebury children’s hospitals merged, and to still be a part of the team that works here today.

“It has been brilliant to welcome Rijul back to the hospital as his arrival 10 years ago marked a new beginning for RMCH. Over the last decade we have achieved so much, providing world-class and specialist care for children and young people across Greater Manchester, the North West and beyond.”

Rijul’s mother, Jaya who joined him at the hospital today is also a nurse on the Haematology Day Unit at Manchester Royal Infirmary (MRI) and has been a part of the Trust for the last 18 years.

She said: “I cannot believe that it has been 10 years since I was first here with Rijul when he was just 18-months old, I look at him now and wonder where time has gone. It is wonderful to be invited back to meet with some of the staff that still work here today. We feel very proud and privileged to be a part of this milestone.”

Over the last 10 years the Paediatric Emergency Department has treated more than 430,000 children and the Burns Unit within the hospital is the largest specialist unit in the UK, caring for more than 15,000 burn injured children over the last decade.

Chief Executive of Royal Manchester Children’s Hospital, Dena Marshall said: “As the Chief Executive of RMCH, it gives me great pleasure to celebrate the hospital’s 10th birthday with all of our fantastic colleagues and patients.

“Our staff are our greatest asset here at the hospital and all of our achievements over the last decade are a real testament to the fantastic teams we have working around the clock providing family-centred, world-class care.

“I would also like to thank the North West communities who have supported the RMCH Charity over the last 10 years and continue to do so, we are so incredibly grateful for your donations and ongoing support for RMCH.”

Royal Manchester Children’s Hospital Charity has developed a special video to mark the occasion – celebrating some of the remarkable achievements over the last ten years.

The video, which you can watch here, is narrated by long-term supporter of the Charity and famed Manchester actor and comedian John Thomson.

It also features stories from across the hospital about courageous children who have been treated at RMCH and fundraised for the charity including Ella Chadwick, Declan McEntee and Harley Lane.

Sarah Naismith, Director of Royal Manchester Children’s Hospital Charity, said: “The video is one of a number of exciting things the Charity has planned throughout the month and indeed 2019.

“Supporters are being encouraged to hold their own celebration parties to fundraise, to take part in 10th birthday year events such as the upcoming Humphrey’s Heroes Abseil in June, dress in green for the Charity’s Be Seen in Green day on Friday, 5th July and join in the fun at the Lantern Walk on Saturday, 16th November. Many more events are available to see on our website.”

Click here to find out more about Events you can take part in for RMCH Charity. 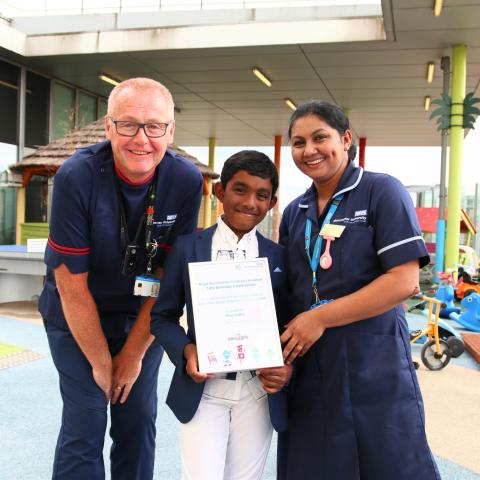