A team of 20 determined cyclists from Aviva, and its key broker partners, will be taking on the challenge of riding 100 miles in one day between Aviva’s offices in Manchester and Sheffield - in memory of Aviva employee Kelly Brewster who tragically lost her life in the Manchester attack.

The challenge is aiming to raise £50k for Royal Manchester Children’s Hospital, as chosen by Kelly’s family to thank them for their support of Kelly's niece, Hollie Booth, and many other young victims who were treated there following the attack.

Kelly’s family and friends will be providing support alongside Aviva colleagues during this gruelling challenge, which will include cycling via Bakewell in the Peak District.   The team will set off from the RAPHA Clubhouse, 5 St Anns Passage, Manchester, M2 6AD (close to Aviva’s Manchester office) at around 7.30am and plan to arrive the Aviva office, No6 Pear Street, Sheffield, SL11 8JJ at around 4.30pm.

Aviva’s Gareth Hemming said: “This awful tragedy had a massive impact on our people, which is why we decided to do something in Kelly’s memory and raise money for a cause close to her family’s heart.  Kelly was a much loved and respected colleague who was with Aviva for seven years, working at our Sheffield office – so it’s fitting that we finish the journey there surrounded by people who worked closely with Kelly.

“It’s going to be a tough and emotional challenge but the memory of Kelly and the thought of raising money for such a great cause will drive us on to the finish.”

Commenting on the event, Kelly’s sister, Claire Brewster, said: “We cannot thank the Royal Manchester Children’s Hospital enough for the treatment, care and support they gave Hollie and other young victims who were caught up in the Manchester attack, and at such a traumatic time for us all. Kelly would be proud of the challenge that the people from Aviva are about to undertake, with the money being raised going to such a great cause which will now be close to our hearts forever. We would like to thank the team from Aviva for putting together this event in memory of Kelly and we hope it is something that friends, family and colleagues can remember Kelly by for many years to come. Good Luck!

Angela Rowe, Community Fundraising Manager at Royal Manchester Children’s Hospital Charity comments: “We are incredibly grateful to the team from Aviva and Kelly’s family for choosing to support our Children’s Hospital in this way. The Aviva team are undertaking an ambitious challenge which is a lovely way to do something special in memory of Kelly. Donations like this help to make a real and lasting difference to the poorly children treated at our hospital so we are delighted to have their support. We wish the team all the best and look forward to hearing how they get on with the cycle.” 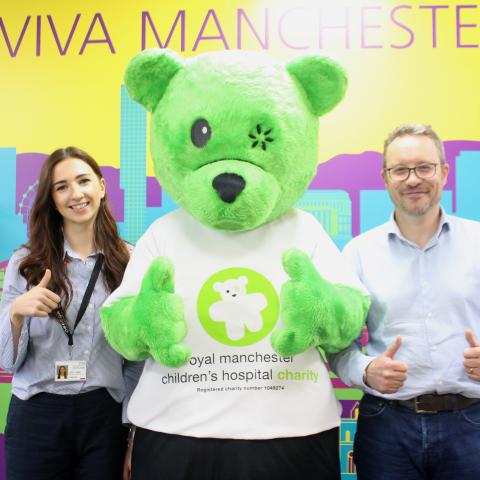