Home > News > £1 Million Donation to the Helipad Appeal is Made

£1 Million Donation to the Helipad Appeal is Made

The HELP Appeal - the only charity in the country dedicated to delivering helicopter landing pads at all Major Trauma Centres and key A&E hospitals across England and Scotland - has pledged £1 million to Central Manchester University Hospitals NHS Foundation Trust (CMFT) Charity's new helipad appeal. The Trust is home to Royal Manchester Children's Hospital.

The donation is a huge kick start to the Charity's fundraising campaign, as the donation amounts to over a quarter of the total funds needed.

“Central Manchester has world class hospitals and air ambulance service, now they urgently need a helipad to complete the emergency care triangle. Having a helipad on the hospital site will significantly reduce the amount of time it takes for a seriously ill patient to get to the expert care they urgently need. The quicker they can see a consultant, the better chance of survival and making a full recovery.

“Knowing that the HELP Appeal’s £1million donation will bring the CMFT Charity’s Helipad Appeal significantly closer to its goal is fantastic.”

Using the strapline, ‘Time Saves Lives’, CMFT Charity’s Helipad Appeal will enable the creation of a brand-new 24-hour access primary helicopter landing site, the first of its kind in central Manchester. This will allow the Trust to save many more lives and will increase the chances of a full or improved level of recovery in a great many seriously ill or injured patients.

Located on the roof of the new multi-storey car park on Grafton Street, the helipad will be connected to the hospitals by a high-level link bridge and roof top corridor.

Currently the hospitals on the central site, including Royal Manchester Children’s Hospital, Manchester Royal Infirmary and Saint Mary’s Hospital, rely upon a secondary landing site in a nearby park. This arrangement means that patients initially transported by air ambulance must then be transferred the final mile of their journey by land ambulance. This second transfer, often undertaken on muddy or uneven ground, significantly adds to the risk of complication, particularly in children, due to additional handling of the patient. A secondary transfer also adds precious minutes to the overall transfer time with every moment’s delay greatly increasing the risk to life.

When an adult or child suffers a major trauma, the speed with which they can get specialist medical help can be the difference between life and death or between recovering and recovering well. The first 60 minutes following a major trauma or severe injury is known as the ‘Golden Hour’.  Fast access to specialist treatment is vital to give patients the best chance possible.

“We are incredibly grateful for the very generous donation from the HELP Appeal. Its  support means that the Charity now has £2.4 million to raise over the next year.

Donations small or large will all make a substantial difference to our aim of building a 24 hour access helipad. Currently, the hospitals cannot receive patients by air ambulance at night. This helipad will make a real difference to major trauma patients, and those in need of specialist treatments, from across the whole of the North West and at all times of the day. “

“Helipads are of upmost importance in urban areas such as Manchester where secondary sites, which we often resort to using, are not in close proximity to the hospital. Saving vital minutes in transfer time may save lives, reducing instances of death, disability and suffering.”

“We are fully in support of a helipad for CMFT as it will enhance the life-saving service our charity provides.” 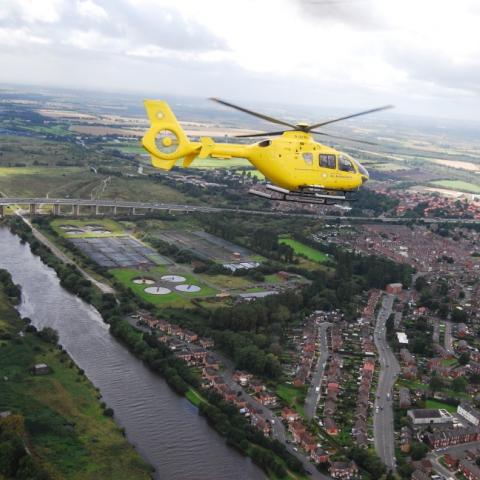