Five-year old Ethan from Wigan was diagnosed with a rare form of childhood cancer on New Year’s Eve 2013. His Mum Karen tells us about why she felt inspired to set up a Tribute Fund in his memory…

Our little boy Ethan first started to feel unwell in the run up to Christmas and a trip to the doctors produced a diagnosis of a viral infection, a prescription of antibiotics and orders him to rest. He kept having a bit of a headache for the rest of the month but otherwise seemed fine and, in the week between Christmas and New Year, our attention turned to his baby sister Lily who, at only four weeks old, was admitted to Wigan Hospital’s High Dependency Unit with breathing problems.

Ethan came in to the hospital on New Year’s Eve with his dad Phillip to see his sister and me but during the visit he started to look really unwell and nearly collapsed. We took him to the A&E department where we were told he had a childhood migraine and, since his sister was already in the hospital, they arranged for Ethan to stay in the room next to her. However, he had only been on the ward for around 20 minutes when he had a seizure. The consultants wheeled him straight in for a CT scan, which confirmed a build-up of pressure in his head caused by a mass at the base of his skull. Ethan had a brain tumour called Medulloblastoma.

We were immediately transferred to Royal Manchester Children’s Hospital by the North West and North Wales Paediatric Transport Service (NWTS) and Ethan went straight in to theatre to drain the fluid surrounding his brain. He returned to the Paediatric Intensive Care Unit at 11.45pm where we were allowed to be with him to see in the New Year together.

The doctors performed a second operation to reposition the drain later that night and then, the following day, Ethan underwent his third operation in 24 hours, this time to remove the tumour, which they found to be the size of a golf ball. A subsequent MRI scan showed further bad news – the cancerous tumour had spread to the top of his spine and there was still 1cm left on his brain.

Before Ethan could be moved to Ward 84 and begin his chemotherapy the doctors had to solve the problem of the fluid build-up in his head. He had an Endoscopic Third Ventrical (ETV) fitted, which drains the fluid using the body’s natural brain channels. He also had to have a Hickman Line installed, through which he would receive drugs, food, have bloods taken etc. – that was operation number five.

A week into Ethan’s first round of chemo it became apparent that the ETV wasn’t up to the job so he had yet another operation, this time to fit a VP shunt, which drains the fluid into your stomach through a pressure valve installed behind the ear. This seemed to do the trick for a while and Ethan was able to continue on his course of chemo, spending a total of nine weeks in the hospital in one go.

We were finally able to take him home and we were so very happy to have him with us. There were still plenty of hospital appointments for chemo and MRI scans and we also visited The Christie, where Ethan would be receiving his radiotherapy.

But after five amazing, wonderful weeks Ethan fell ill again and had to be readmitted to the Children’s Hospital. The shunt draining fluid from his brain had failed and he had to have emergency surgery to replace it. Within days, while he was still recovering, he had a number of seizures, prompting the doctors to give him an MRI scan. This scan gave us the worst news of all – the tumour was not only still there but it was growing more aggressively than ever. There was nothing they could do for him.

Despite this, Ethan’s consultant, Dr Kilday, gave him a course of steroids as a last resort, the idea being that this may make him well enough to start his radiotherapy treatment. This seemed to work at first and, five days later, Ethan was transferred to The Christie for his first session. He was transported by the same NWTS team who had originally transferred him to the Children’s Hospital and, despite many months having passed, they still remembered our little boy.

The improvement didn’t last, however, and the following day, his breathing deteriorated. An x-ray confirmed that the tumour had progressed even more and that the only thing decent to do was to make him comfortable.

At every step of the way, we received nothing but exceptional care from everybody at Royal Manchester Children’s Hospital. As a family we are intent on fundraising as much as we can to show our appreciation to the Hospital and staff who treated him and to help support research into this awful disease. It is our dearest wish that one day no family will have to go through the pain of losing their child to Medulloblastoma.

We set up a Tribute Fund with Royal Manchester Children’s Hospital Charity in Ethan’s name. All monies raised will go towards funding the research undertaken by specialists in the Children’s Brain Tumour Research Network, led by Ethan’s consultant, Dr Kilday. We are confident that these brilliant men and women will one day find a way of realising our wish for us. 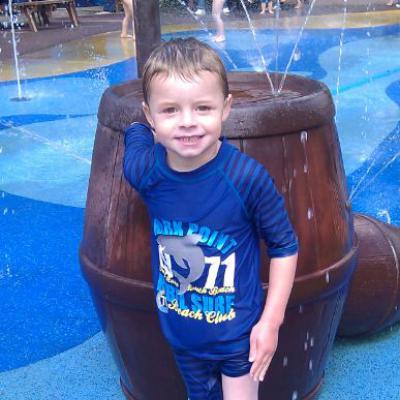